How does Zoom make money? All you need to know‍

Find out all you need to know to answer the question, how does Zoom make money. Check out the origin, funding, business model, growth, revenue of Zoom.


When looking for video conferencing solutions, although there are several apps available, only a few are widely popular. Skype, Google Meet, Zoom, and other alternatives have largely taken over the video calling world. Particularly in the year of the pandemic, video calls have become synonymous the world over with Zoom.

Zoom has surged in popularity since the start of the Covid-19 pandemic, with phrases such as ‘Zoom fatigue’ and ‘Zoom bombing’ no longer being strange. Looking at Zoom’s stocks skyrocket and also take a dip based on how the pandemic has progressed so far, it’s no wonder that the question, ‘How does Zoom make money’ has popped up many times. 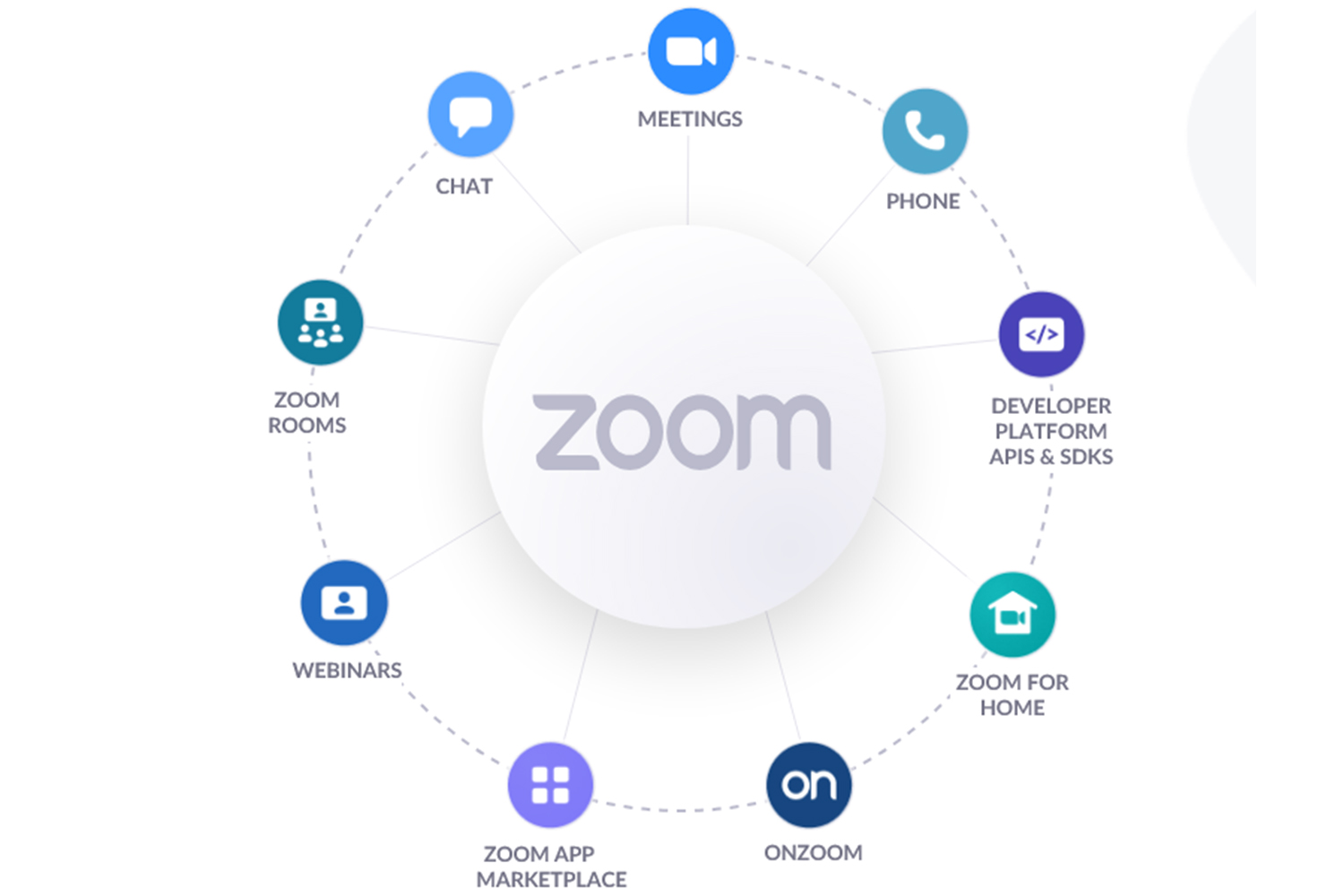 If you are also looking for the answers to this query on “how does Zoom make money”, then you’ve come to the right place. In this article, we have elaborated on exactly that.


Zoom’s founder, Eric Yuan, was one of the first 20 software engineers at Webex, a web and video conferencing app that was acquired by Cisco in the year 2007. After the acquisition, Eric soon became the VP of Engineering of Cisco.

Working on WebEx, Eric had seen that the app wasn’t an ideal video communication app, and faced frequent issues. For instance, the users’ product version (PC, Android, etc.) had to be identified every time someone logged in, and this slowed down the app. A large number of users simultaneously joining a conference also caused the same issues. Eric wanted to fix this and proposed a solution, but it got rejected.

He then left Cisco, after deciding to start his own company - and build a smartphone-friendly video conferencing solution. He started Saasbee in 2011 but wasn’t able to get funding, as investors were skeptical of the competition in the market posed by big names such as Skype and Google.

Zoom’s beta version allowed only 15 people to attend a call and faced issues due to the technology being subpar, interface not being smooth, deployment being expensive, etc. However, Zoom was quick to improve on these features, and in 2013, the company launched its first product to the public. This allowed 25 people to join the conference at a time.


Alongside Zoom’s product launch, the company was able to raise $10 million in its Series A round of funding in 2013. In just a month, the platform had 400,000 users.

Over time, many VCs showed interest in funding Zoom and the company raised another $6.5 million in September the same year, taking its total valuation to $24.5 million.

Since then, Zoom has so far had two more rounds of funding. The Series C funding round was in February of 2015 and Series D in January of 2017. The amount raised in the two rounds was $30 million and $115.2 million respectively, according to Craft. The last round saw Zoom getting investments from top VCs such as Sequoia Capital. In April 2019, the company became a public company via an initial public offering. Starting at US$36 per share, the share price increased over 72% on the first day of trading alone. By the end of the first day, the company was valued at US$16 billion.

From the funding, it is quite obvious that Zoom has surely made major strides in the video conferencing world. However, the question of how Zoom makes money apart from VC funding persists. Now that we know the origins and funding, let’s find out: How does Zoom make money?


Zoom has a free forever ‘Basic’ app in its ‘Zoom Meetings’ product that is widely used. This version allows up to 100 participants to join a group call. It comes with a limitation that if you want more than 2 people to join a meeting, you’d have to limit the time to 40 minutes. However, Zoom does offer a number of other products and the subscription plans of these products are how Zoom makes money.


How does Zoom make money through Zoom Meetings?


Zoom Meetings is the main offering of Zoom Video Communications, Inc. and is the most popular and commonly-used one. It also involves Zoom chat, which allows users to share text, URLs, images, audio files, and other content. In large companies such as Zoom, CROs, also known as Chief Revenue Officers, are responsible for generating revenue for a company.

1. Basic: The Basic plan is good for personal meetings. It is free, allows up to 100 participants, and lets you have unlimited one-on-one meetings.

2. Pro: The Pro plan is great for small teams and allows group meetings for up to 30 hours. It also offers social media streaming and 1 GB Cloud Recording (per license). Users can purchase up to 9 licenses per account, with each license costing $149.90/yr.

3. Business: Priced at $199.90/year/license, the ‘Business’ subscription allows you to host up to 300 participants and gives you recording transcripts, company branding, and more, apart from the features found in Pro.

4. Zoom United Business: This plan combines the features of Zoom Business with the ‘Zoom Phone’ premium features. So, users can use the same license for phone calls, too. It’s priced at $350/year/license.

5. Enterprise: With the capacity to host up to 500 participants and unlimited cloud storage, this is Zoom’s plan for large enterprises, and costs $240/year/license.

Users can also buy optional add-ons such as Audio Conferencing (for phone calls), Large Meetings (allows up to 1000 participants), Cloud Storage, and Premier Support to improve their Zoom experience. 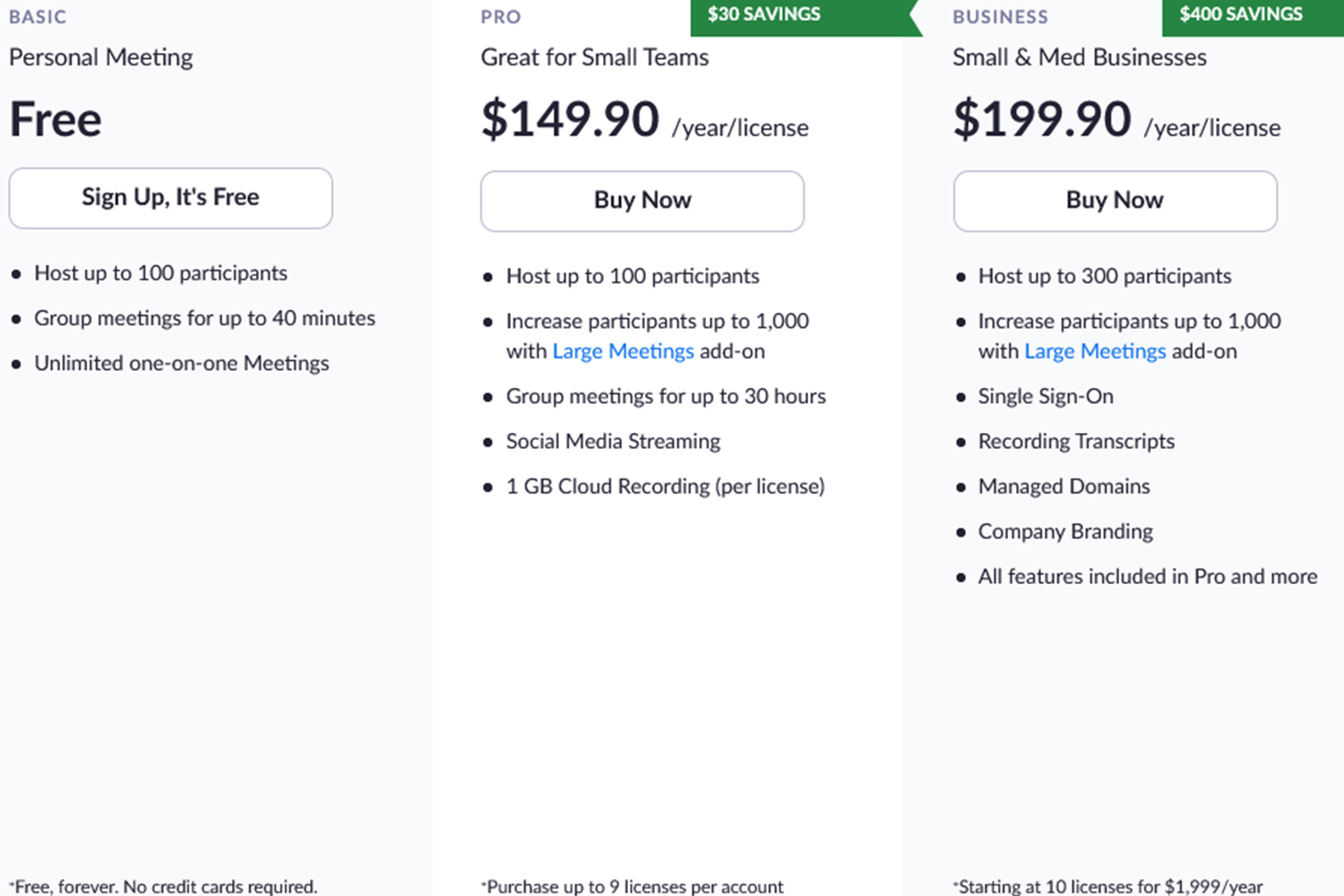 How does Zoom make money through Zoom Phone?


Zoom phone is Zoom’s cloud-based phone system that allows you to make and receive calls directly from Zoom. Through this offering, Zoom has unified all business communication within a single platform.

The Zoom Phone product has 4 subscription models as of April 2020:

1. US & Canada Metered: Gives a US/ Canada number and allows metered outbound calls, domestic SMS, and MMS at $120/year/user.

4. Zoom United Business: Explained above, this is a combo of the ‘Zoom Phone - Pro Global Select’ and ‘Zoom Meetings - Business’ subscriptions.


How does Zoom make money through Zoom Video Webinar?

These make it an ideal platform for all sorts of educational and business webinars and are commonly used for training sessions, market presentations, town hall meetings.

The subscription plans of Zoom Video Webinar are differentiated based on the number of attendees. The most basic one is priced at $400/year/license and allows up to 100 attendees. For hosting 10,00 attendees, one can buy a plan at $64,900/year/license. For hosting anywhere between 10,000 to 50,000 members, one would have to check with the sales team for custom plans.

Zoom also allows users to buy optional add-ons such as Audio Conferencing and Cloud Storage, which are also offered in ‘Zoom Meetings’ with Zoom Video Webinars.


How does Zoom make money through Zoom Rooms?


Unlike Zoom’s other offerings, Zoom Rooms is a software-based room system that provides an integrated experience for audio conferencing, wireless screen sharing, and video conferencing. This is particularly useful for large enterprises that want to always have a seamless video calling experience.

Zoom Rooms can be used for room-only attendees, or remote attendees joining from another room, either from their desktop or mobile device.

Zoom United has ‘Pro’, ‘Business’ and ‘Enterprise’ plans ranging from $300/year/user to $420/year/user. Although the combination of plans and products is a great way for Zoom to decrease the load on the customer’s pocket, it does contribute positively to the firm’s revenue.


Now that we know the subscription models, the last step in gaining a wholesome understanding of ‘how does Zoom make money’ is to know the revenue. As seen from the Craft data for Zoom revenue, the company has been making some serious strides in its profit since the onset of the pandemic. Zoom’s revenue has been progressively doubling since 2018. At the start of FY 2018, its annual revenue was $151.48 million. This increased to $300 million and $622 million in 2019 and 2020 respectively. But 2020 saw a  whopping increase in Zoom’s revenue, with the firm pulling in $2.65 billion as of FY, 2021. The vaccine news, however, did lead to an eventual decline in Zoom’s stock.

The picture below shows clearly how with the increasing number of cases globally, the Zoom stock also increased and how the vaccine news lead to an eventual decline in it. 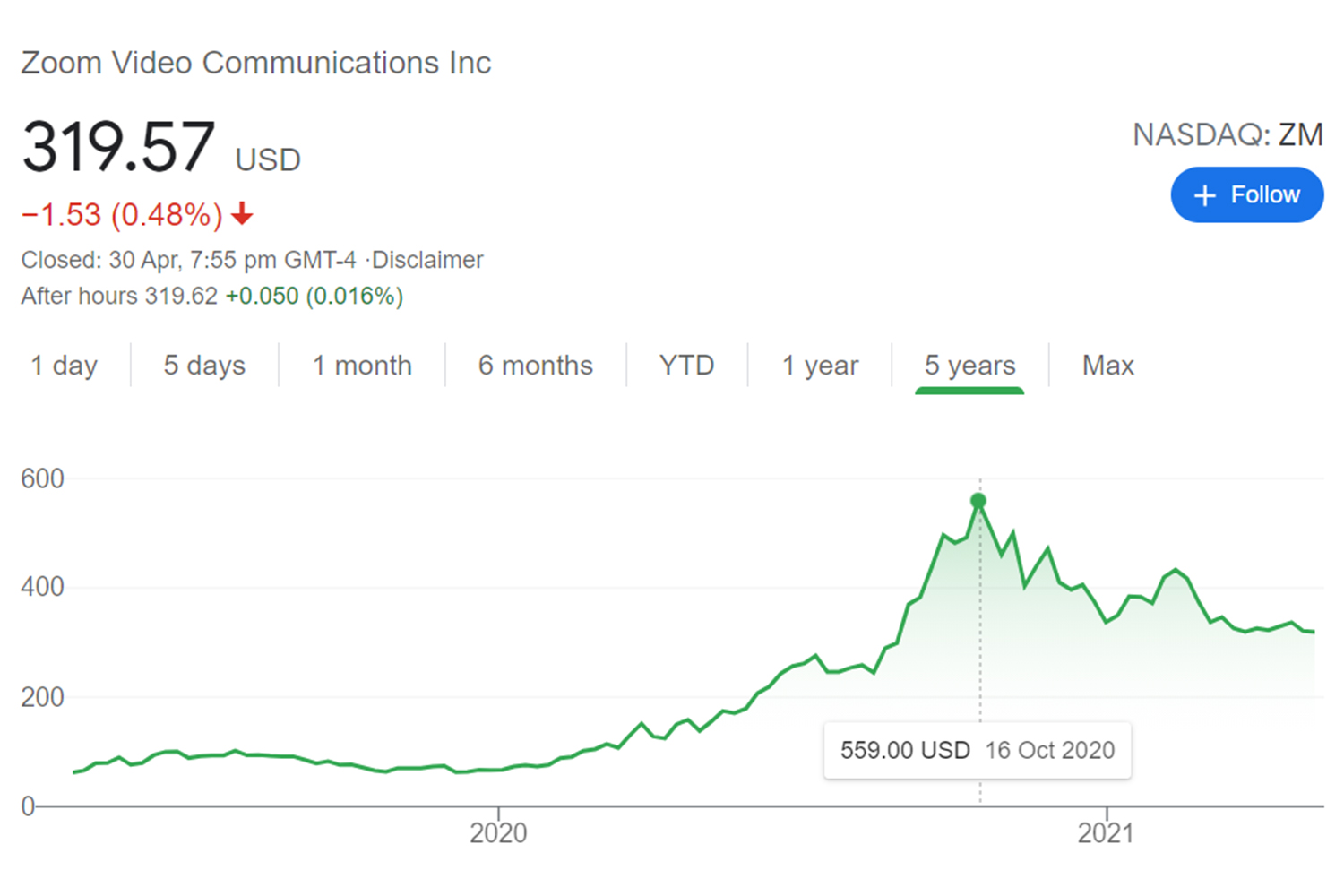