How to make Columns in Google Docs‍


Google Docs is a hugely-popular cloud-based word processing application. It offers a range of features, is very simple and easy to use, and is completely free.

Whether you use Google Docs for personal use, such as keeping a journal, making lists, or for professional use, such as drafting letters or creating documents, it is always important to make sure the document appears organized.

If you are using Google Docs to create documents, reports or brochures, one way to organize your document and make maximum use of white space is to arrange the text in two or three columns.

To make it really easy to split text into columns, Google Docs has introduced a new feature that divides text into two or three vertical parts by using a column break. Google Docs also allows users to modify the parameters of the columns like the number of columns and the spacing between columns.

In this article, you'll learn how to make columns in Google Docs, and also how to format them easily.

Why use two or three columns in Google Docs

How to make columns in Google Docs - Step-by-Step Guide


Read on to learn how to make columns in Google Docs and format your document to keep it organized and easy-to-read.

Step 1. Select the text you want to split into columns 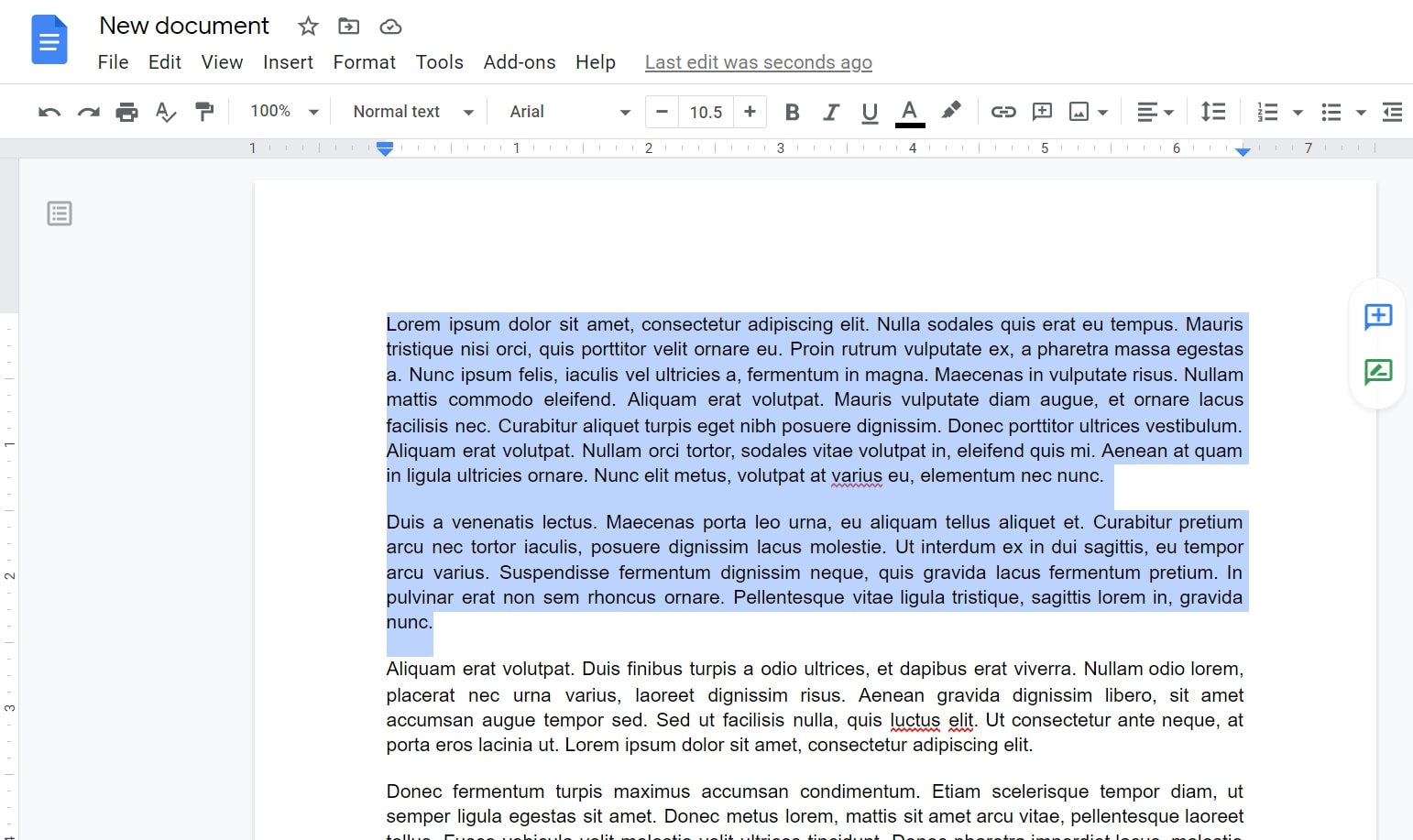 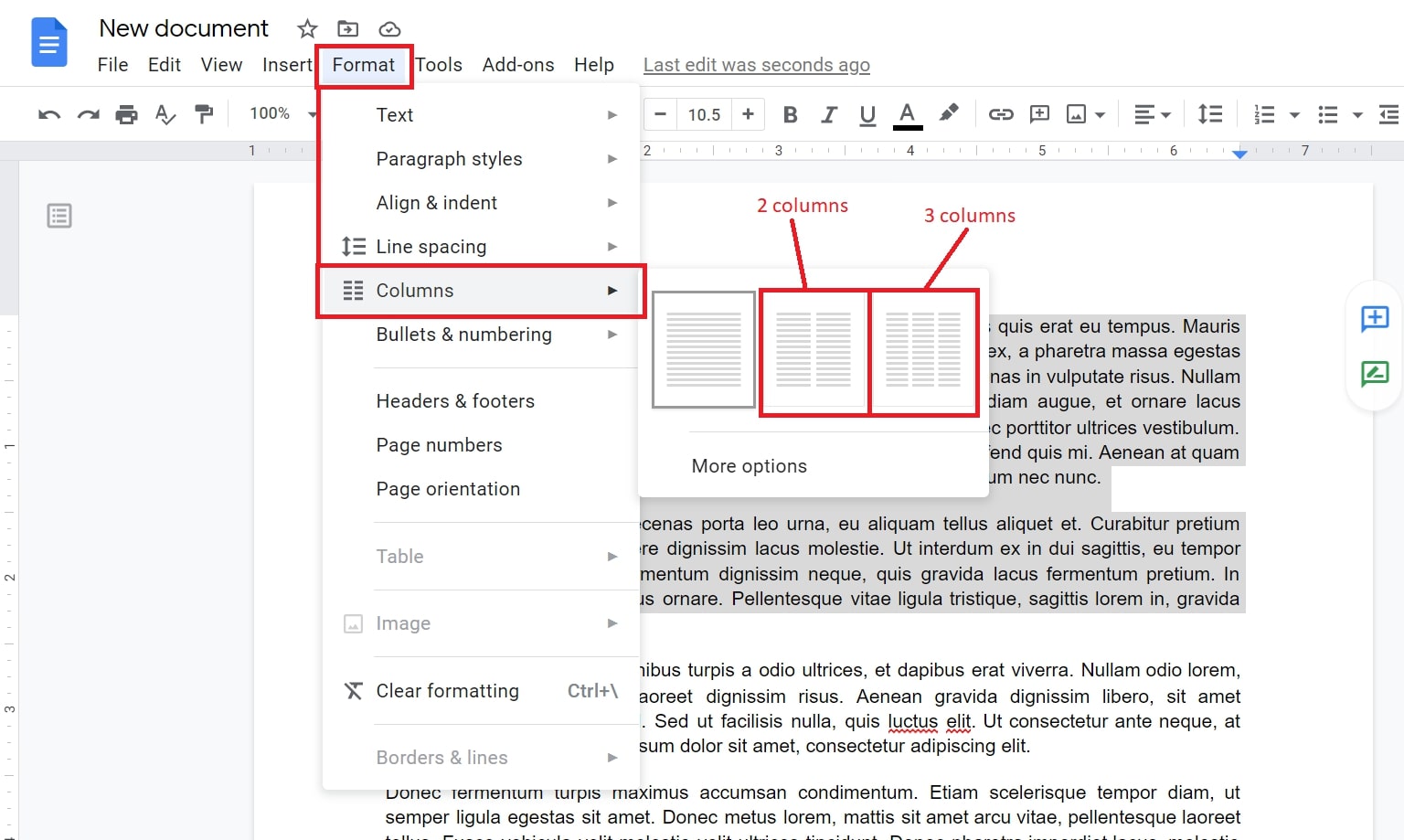 That's it, your selected text will now be divided into two or three columns, based on what you had chosen.

The selected text, if divided into two columns: 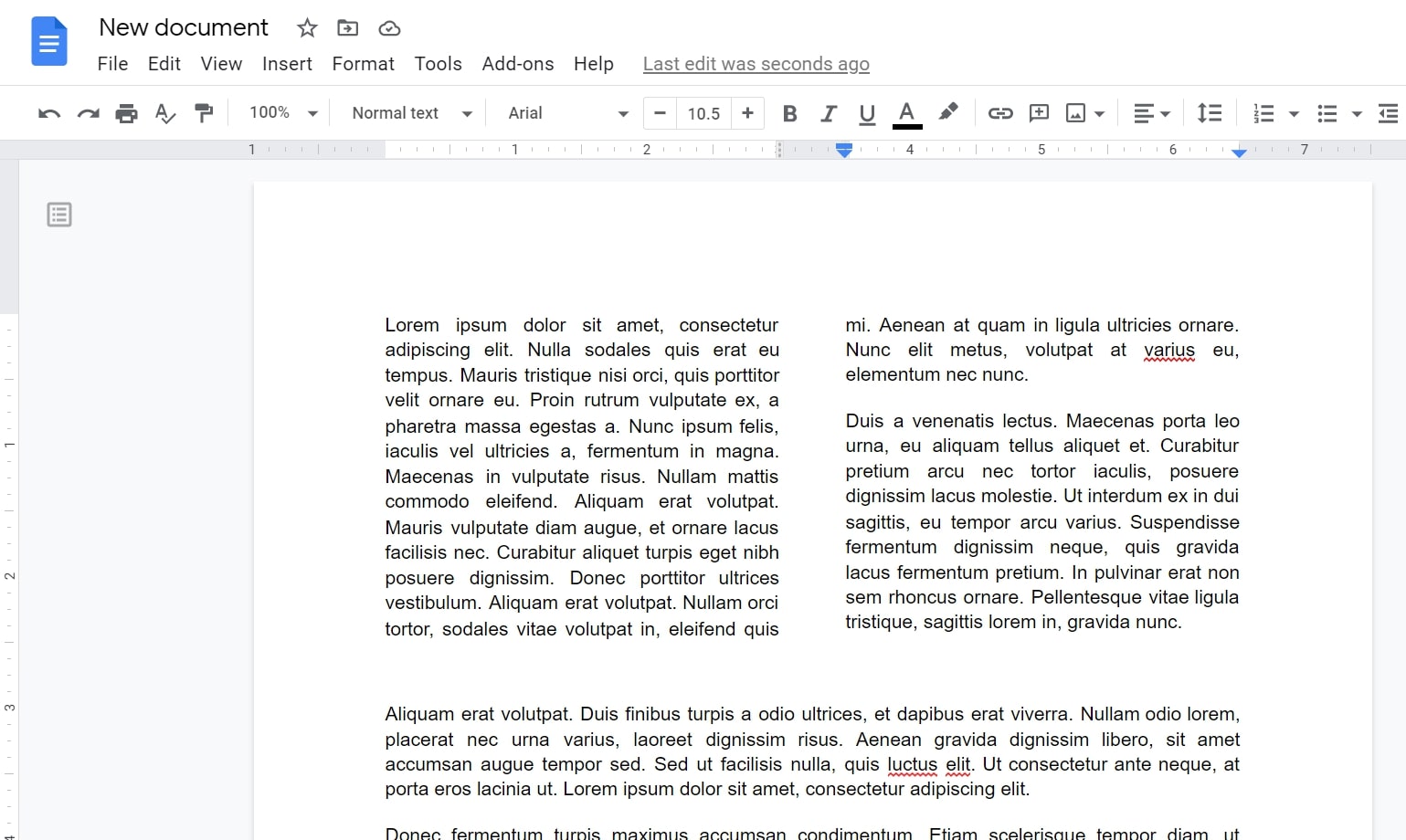 The selected text, if divided into three columns: 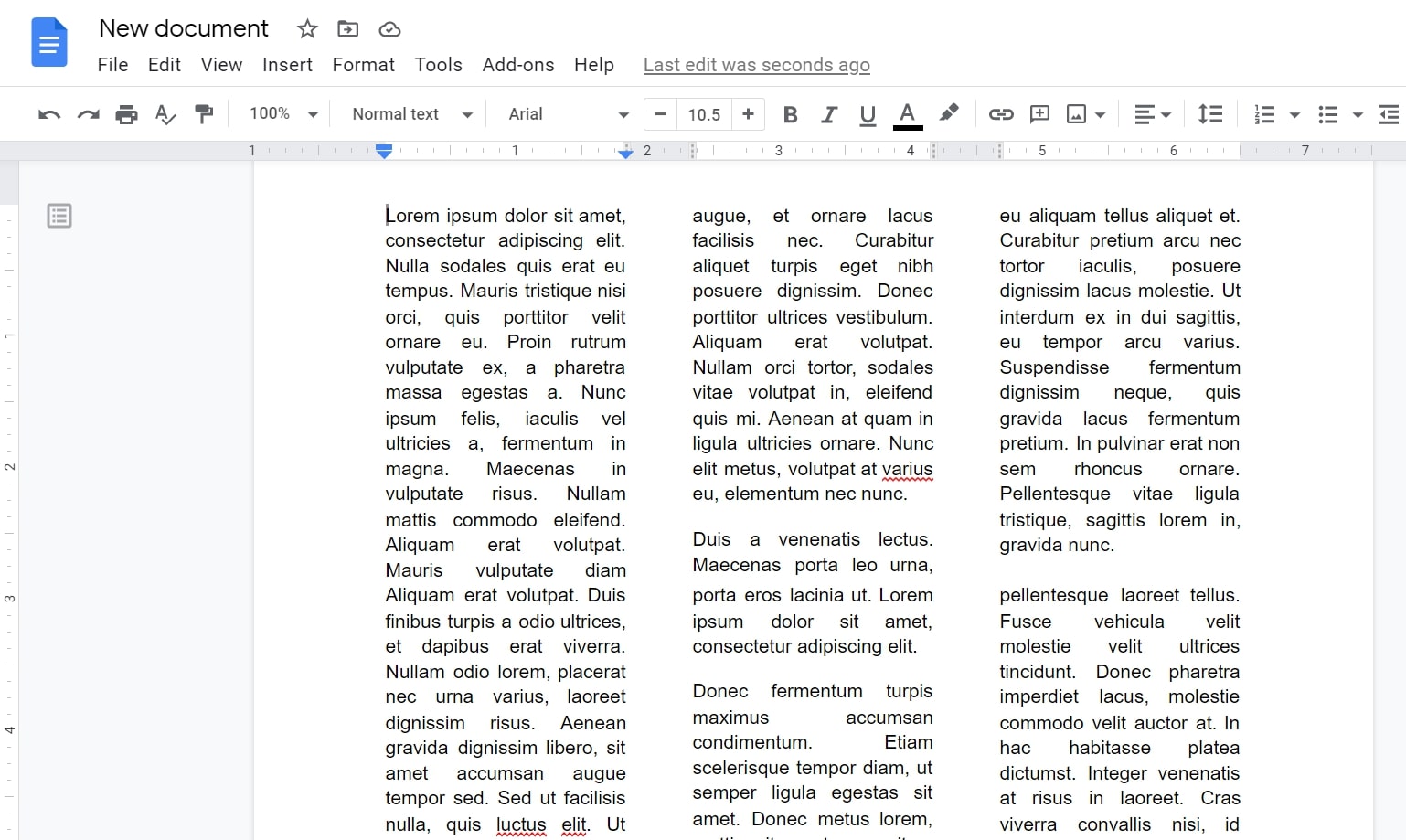 FAQs: How to make columns in Google Docs


a. How to Revert Back to Single-Column Text in Google Docs 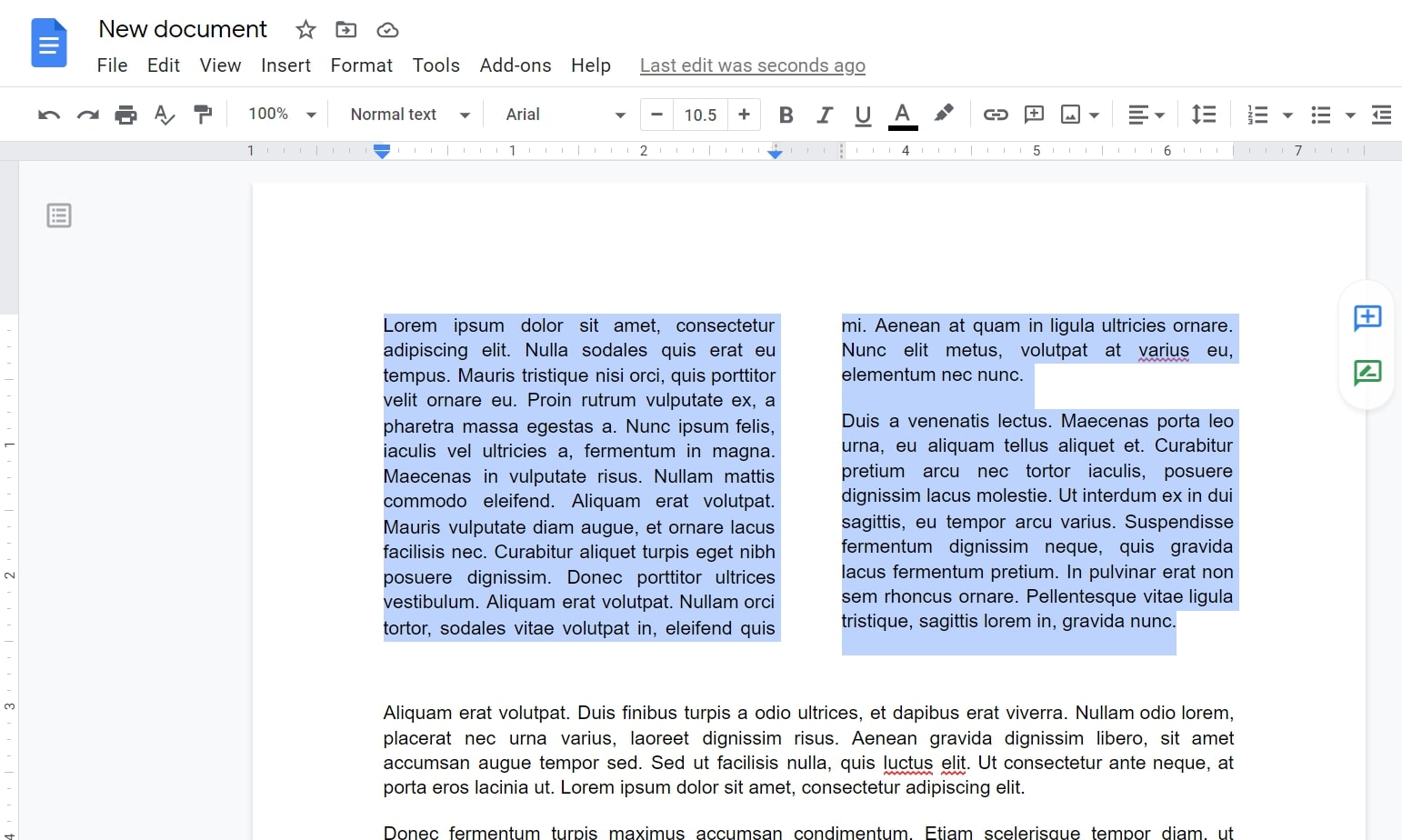 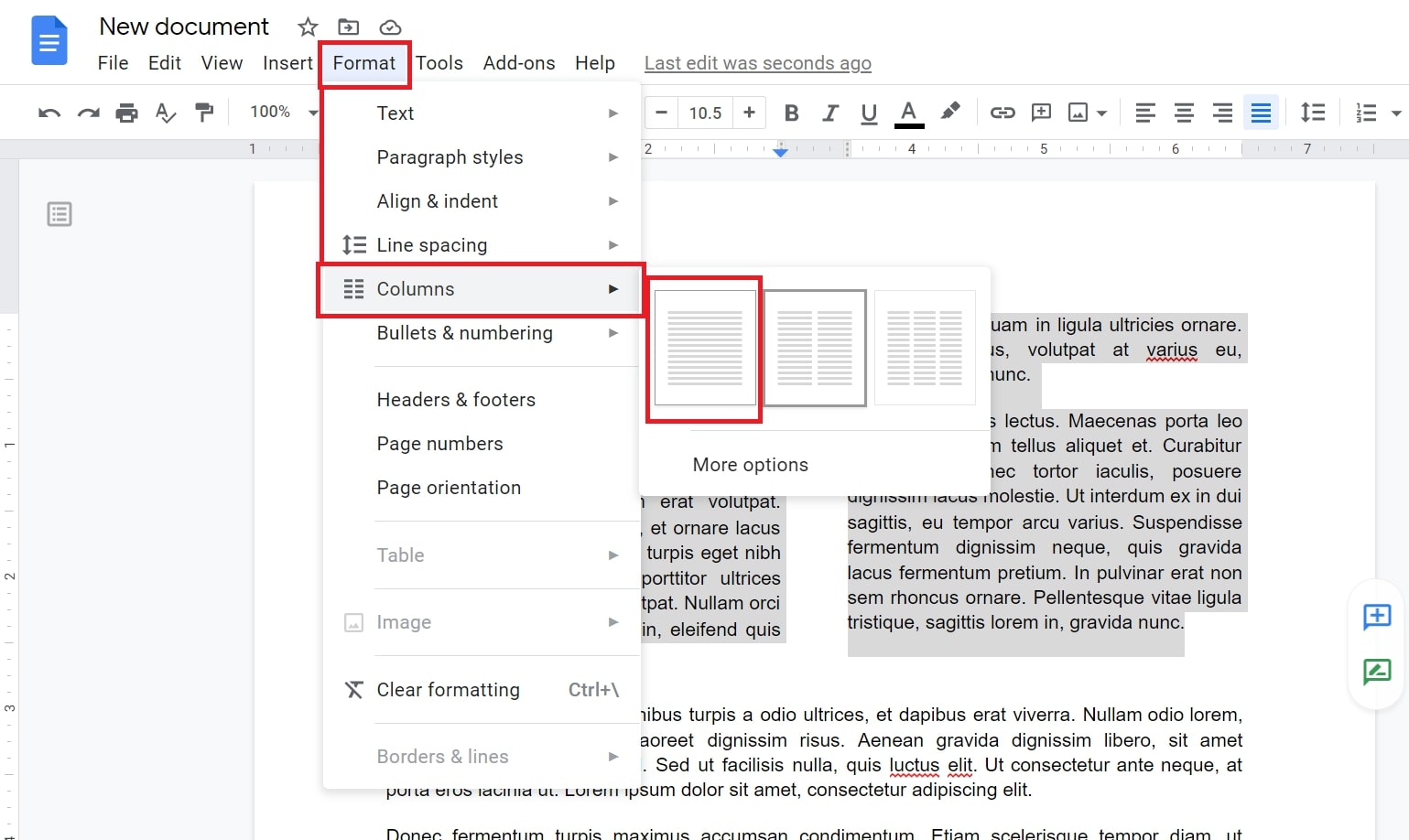 b. How to Arrange Images between Columns?


As mentioned, arranging images into columns is particularly useful in saving space by wrapping text around the image.

For instance, in the below document, there's a lot of white space to the right of the image, which we don't want. 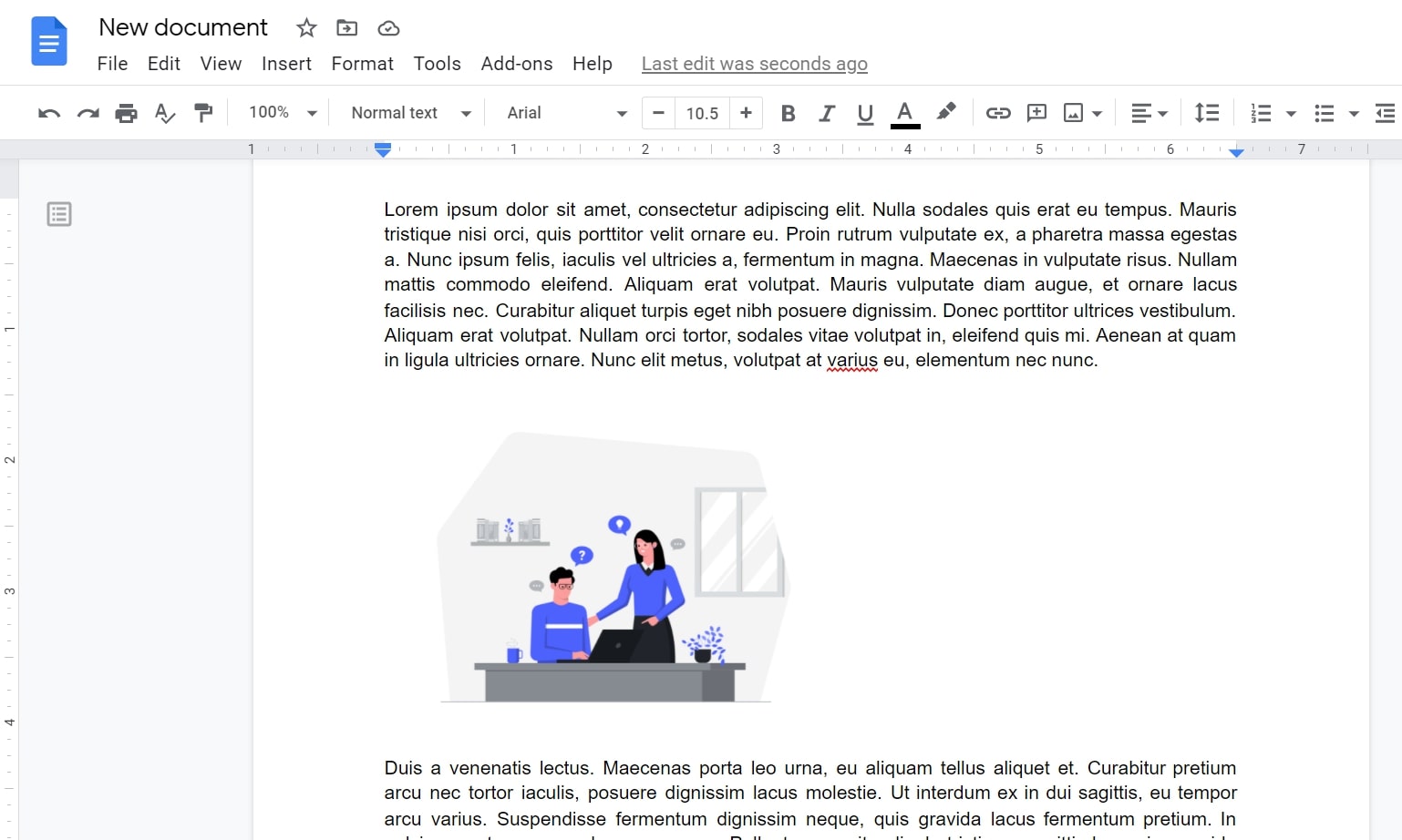 So, we can instead arrange the paragraph above and below the image into two vertical columns. Here's how to do it:

Step 1. Select the text above the image, the image itself, and the text below the image by dragging your cursor across all three. 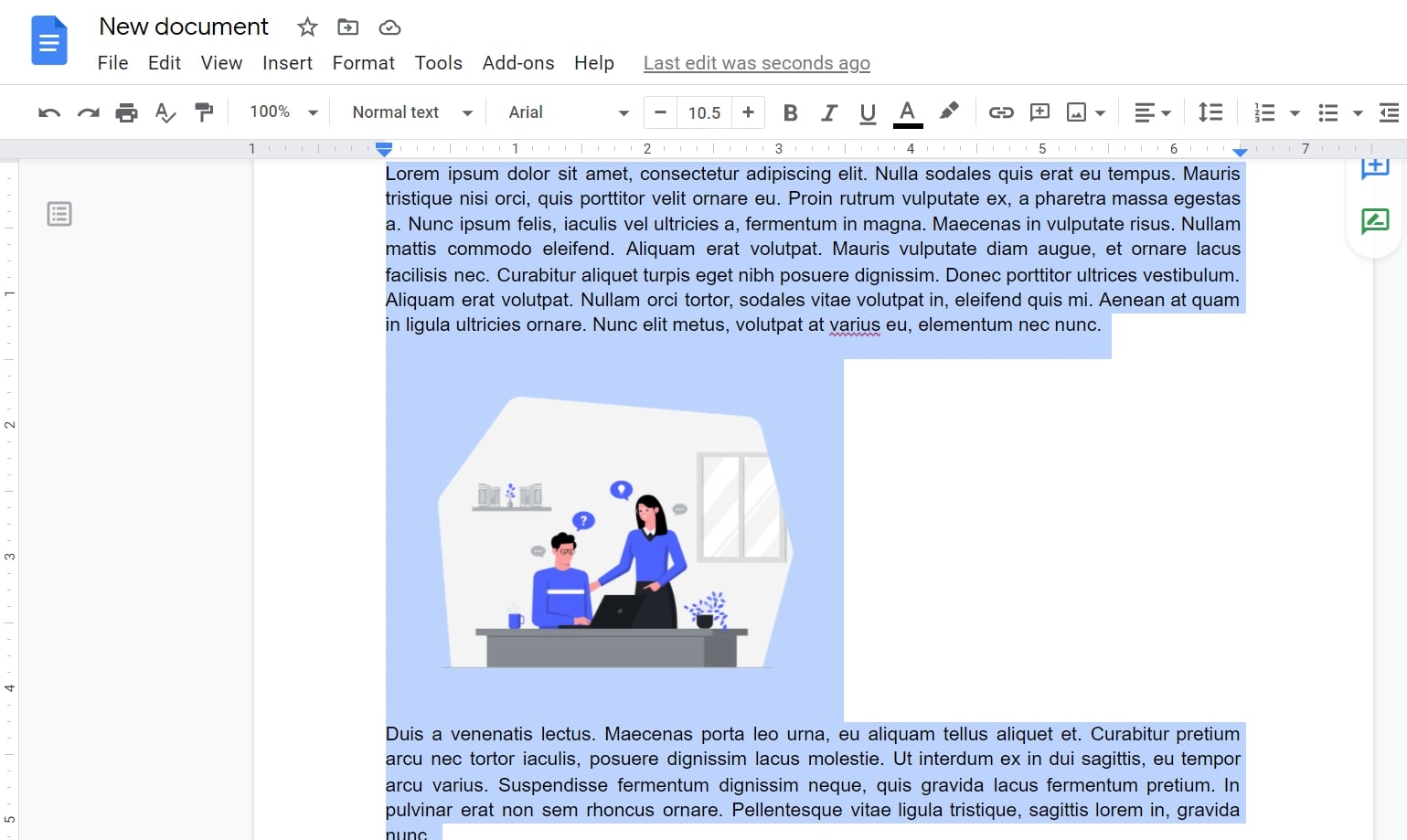 Step 2. Click on 'Format' → Columns → Select Two columns (2nd icon), and you can see that the image is arranged neatly amidst the columns: 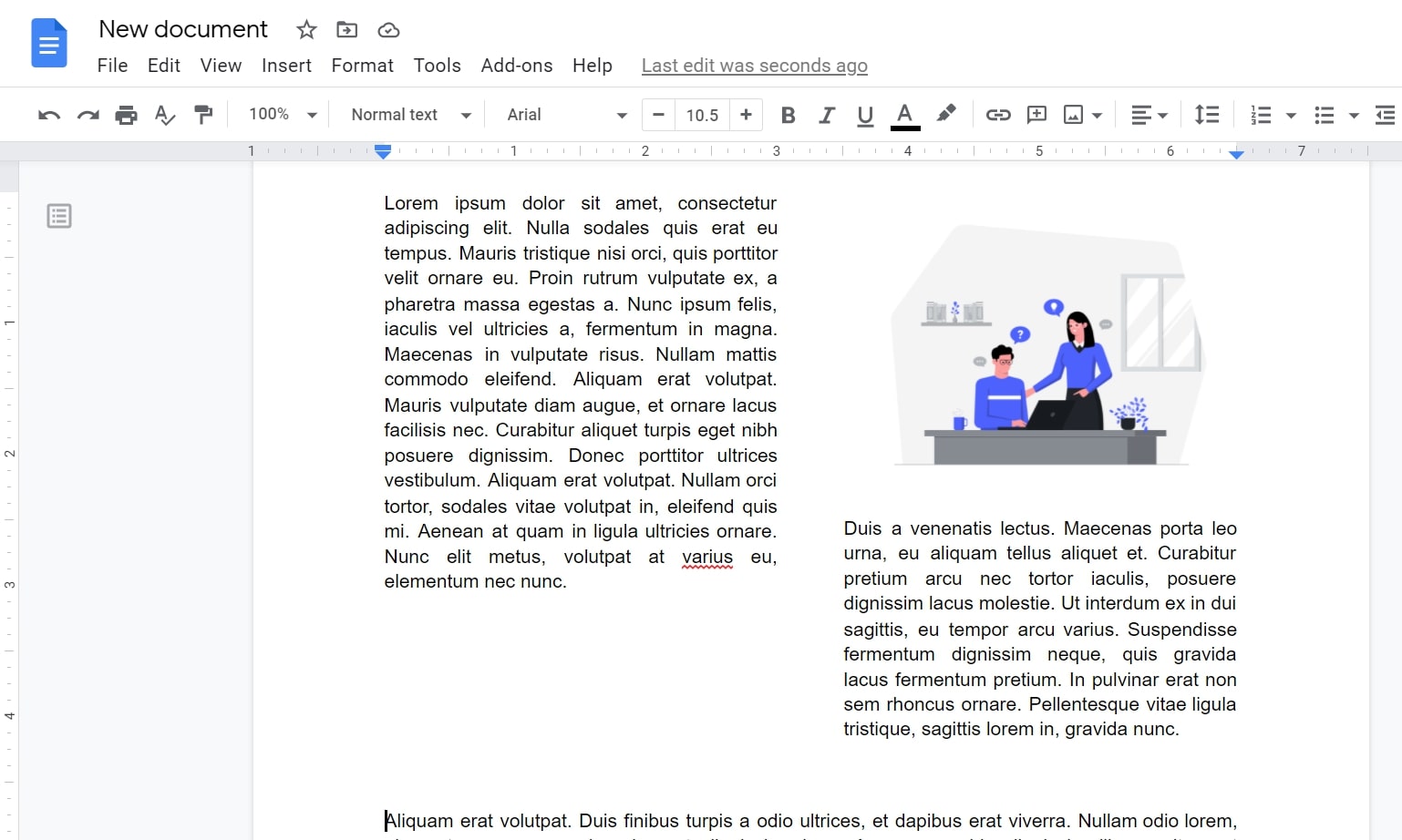 c. Can I customize the column format in Google Docs?


Yes, Google Docs allows you to set custom parameters for the spacing between columns. For this, follow the below steps: 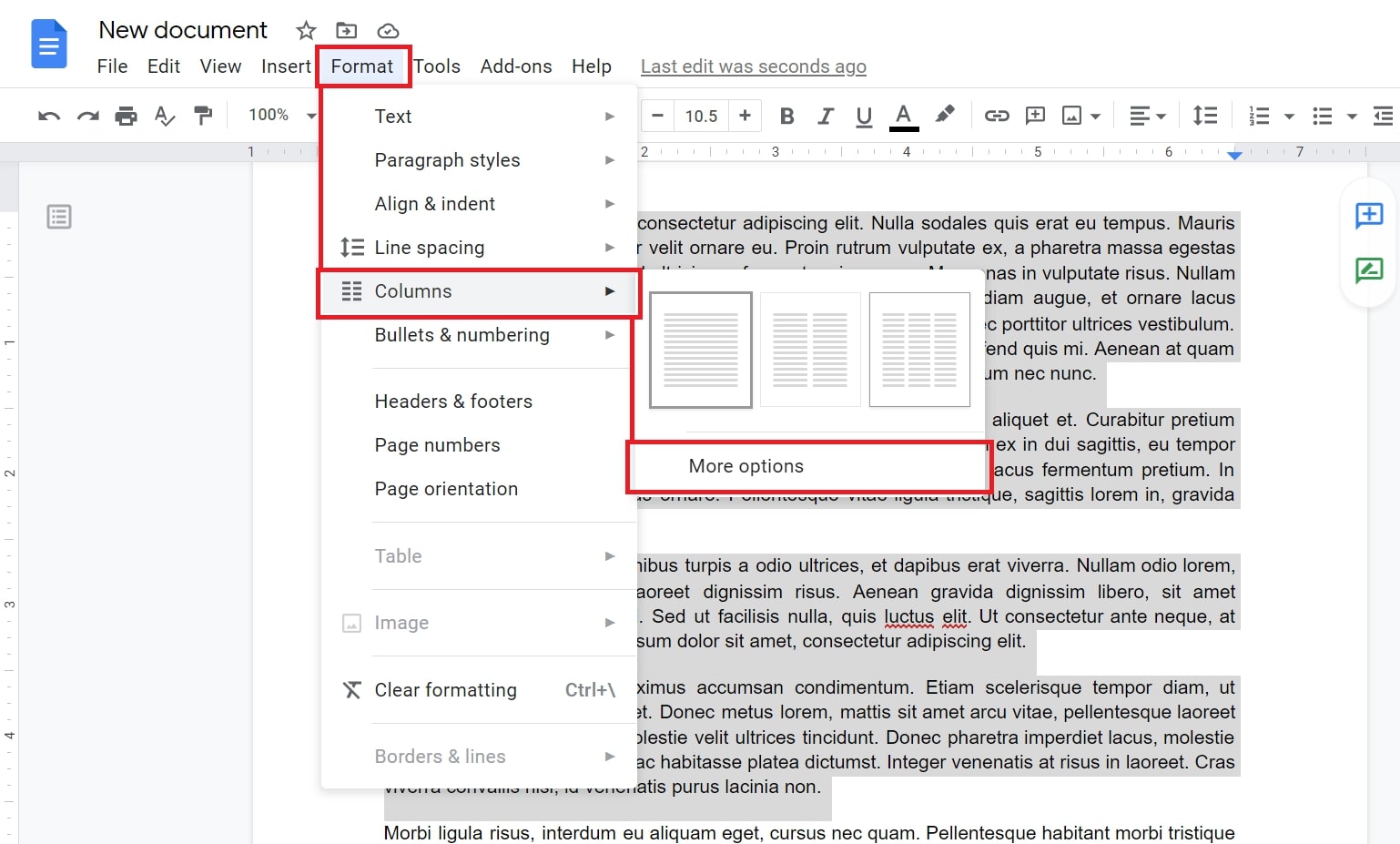 Step 2. In the dialog box that appears, set the number of Columns and required Spacing (in inches). 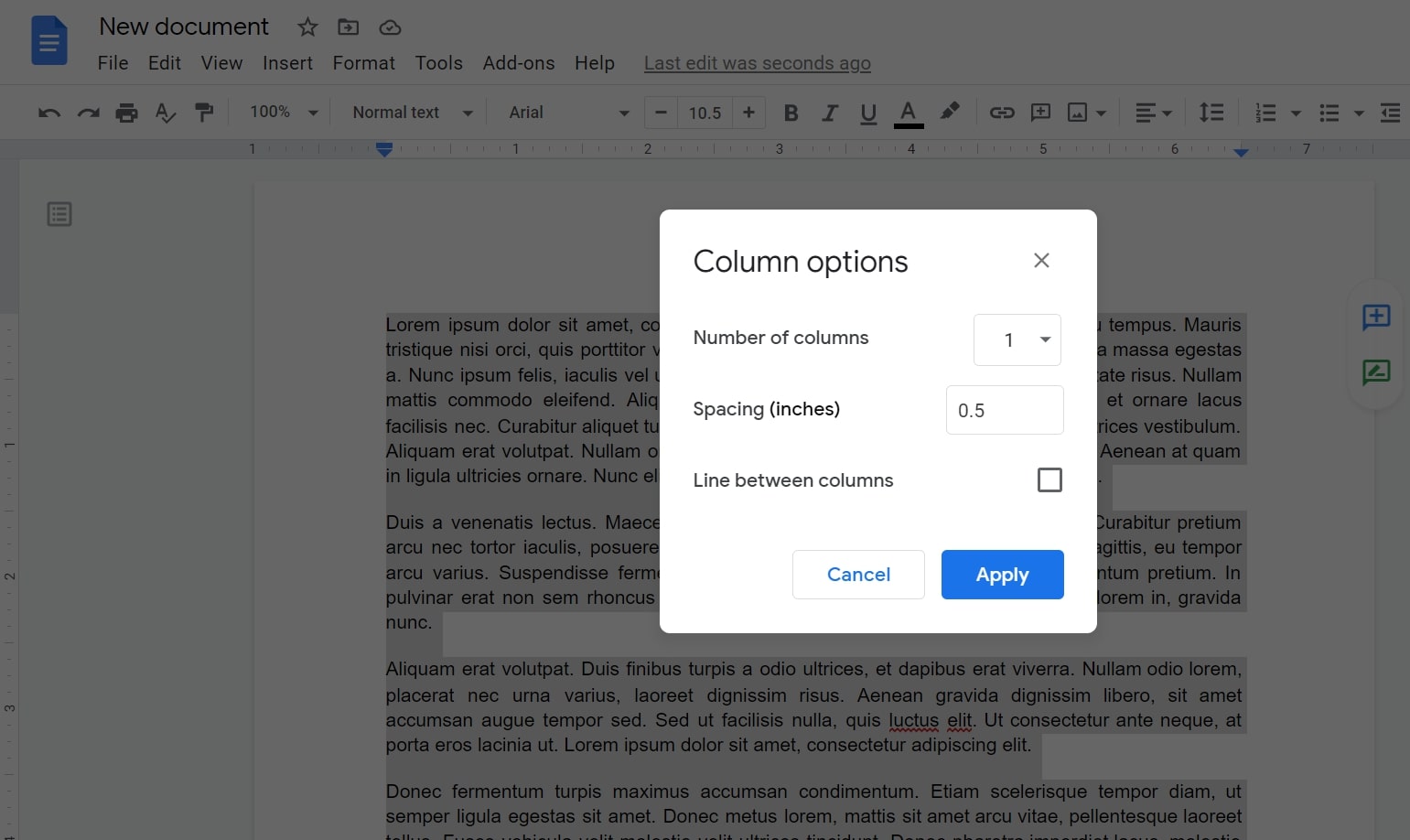 You can also check the 'Line between columns' option to display a dividing line between the columns. This is how the line will appear: 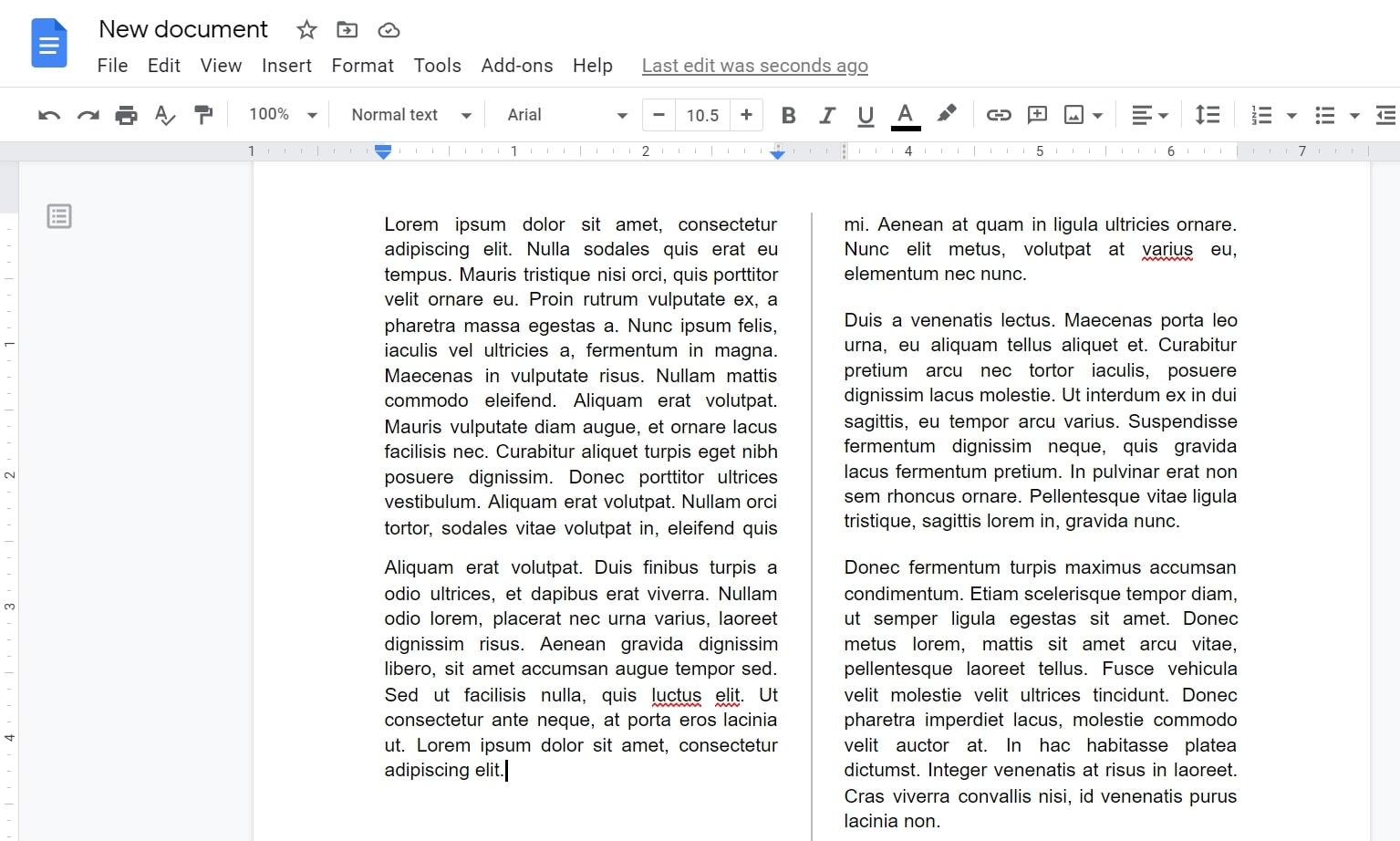 Note: You can also adjust the spacing between columns by dragging the grey rectangle in the ruler, as shown in the image below: 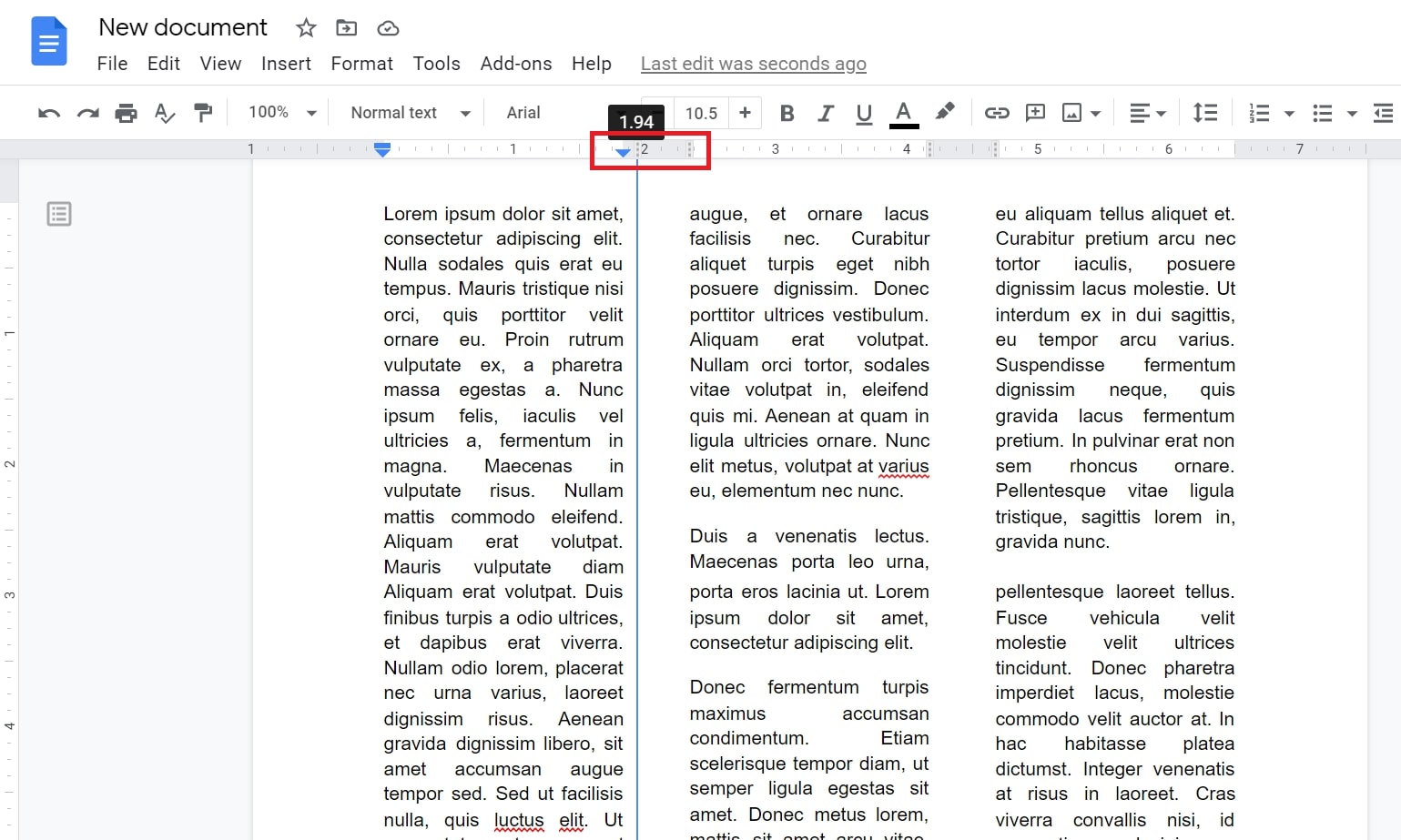 d. Can I make more than three columns in Google Docs?


No, Google Docs only supports the creation of a maximum of three columns. However, you can create a table within the document as a workaround to have more than three columns.

Follow these steps to create four or more columns on Google Docs: 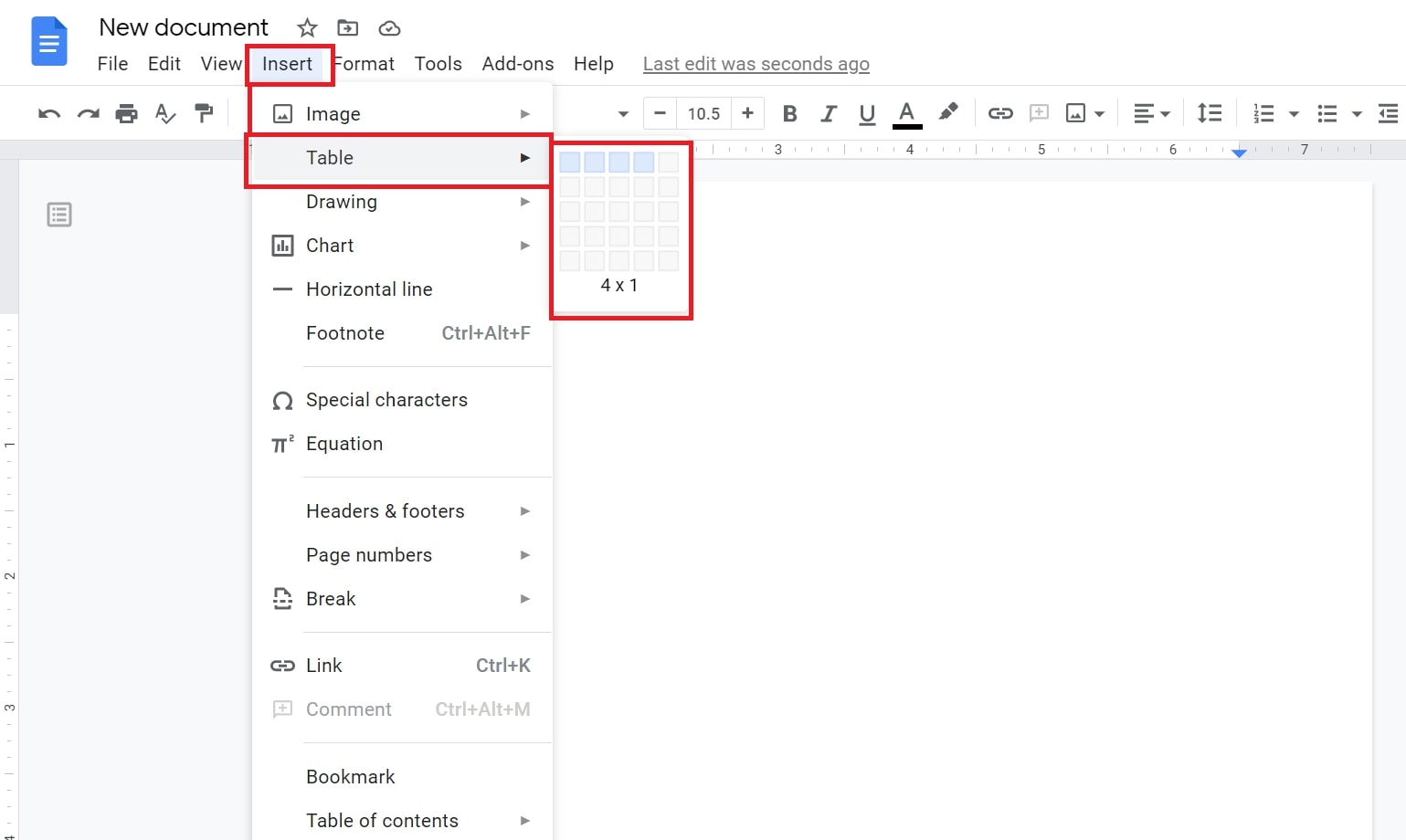 Step 2. The following table will be created. You can drag the bottom border to expand the length of the table according to your requirements. 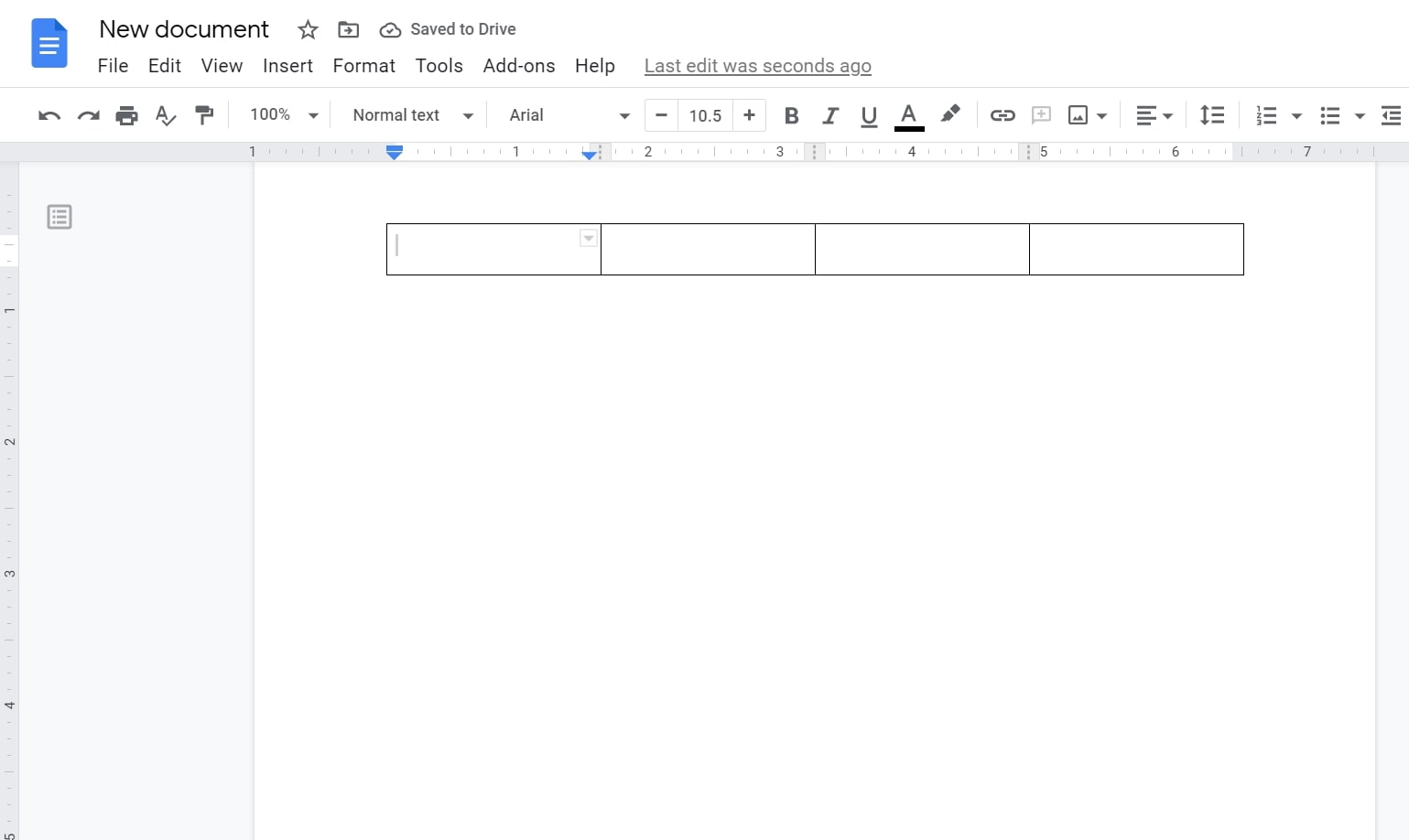 Step 3. Right-click anywhere on the table → Click on 'Table properties'. 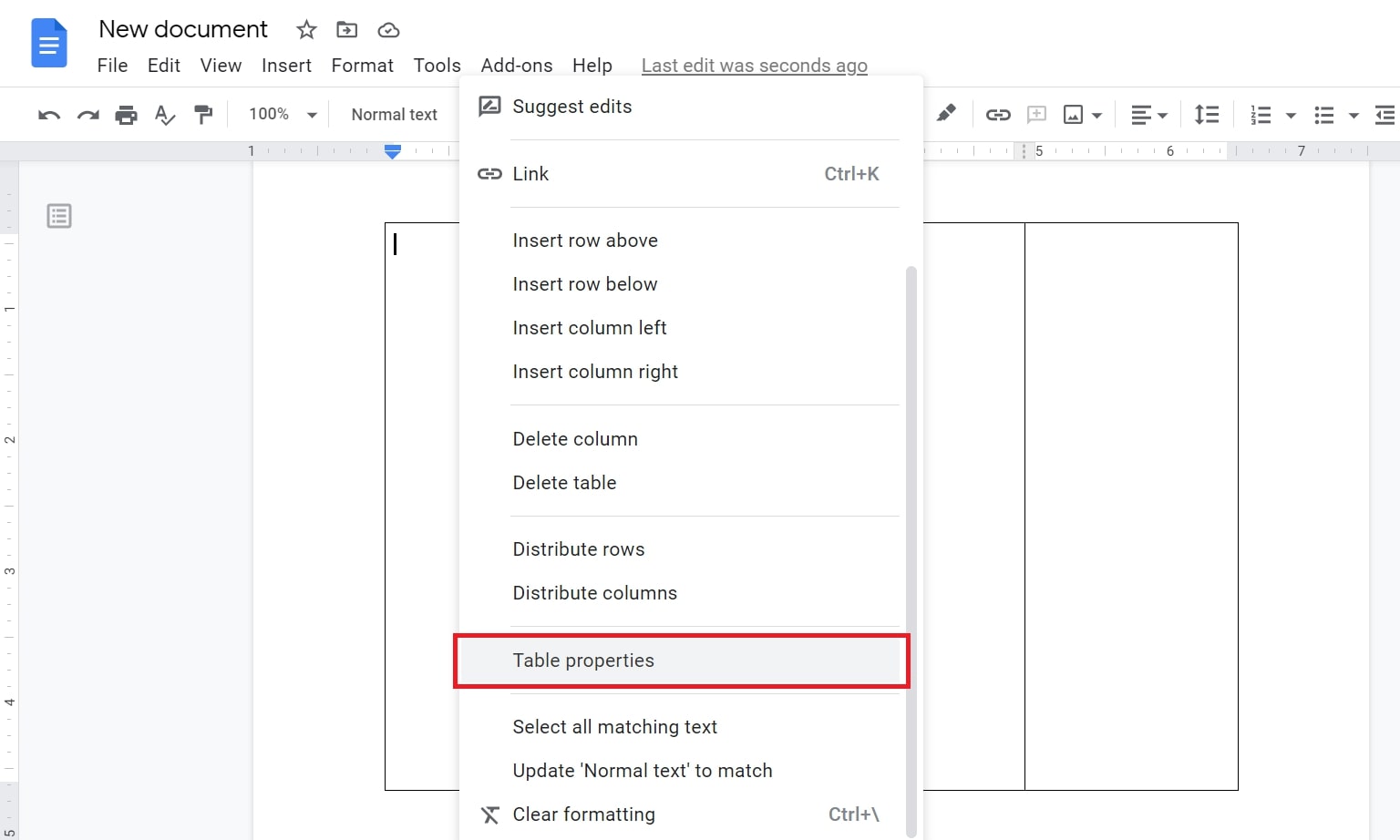 Step 4. Set the 'Table border' as '0pt' to make the table borders invisible. 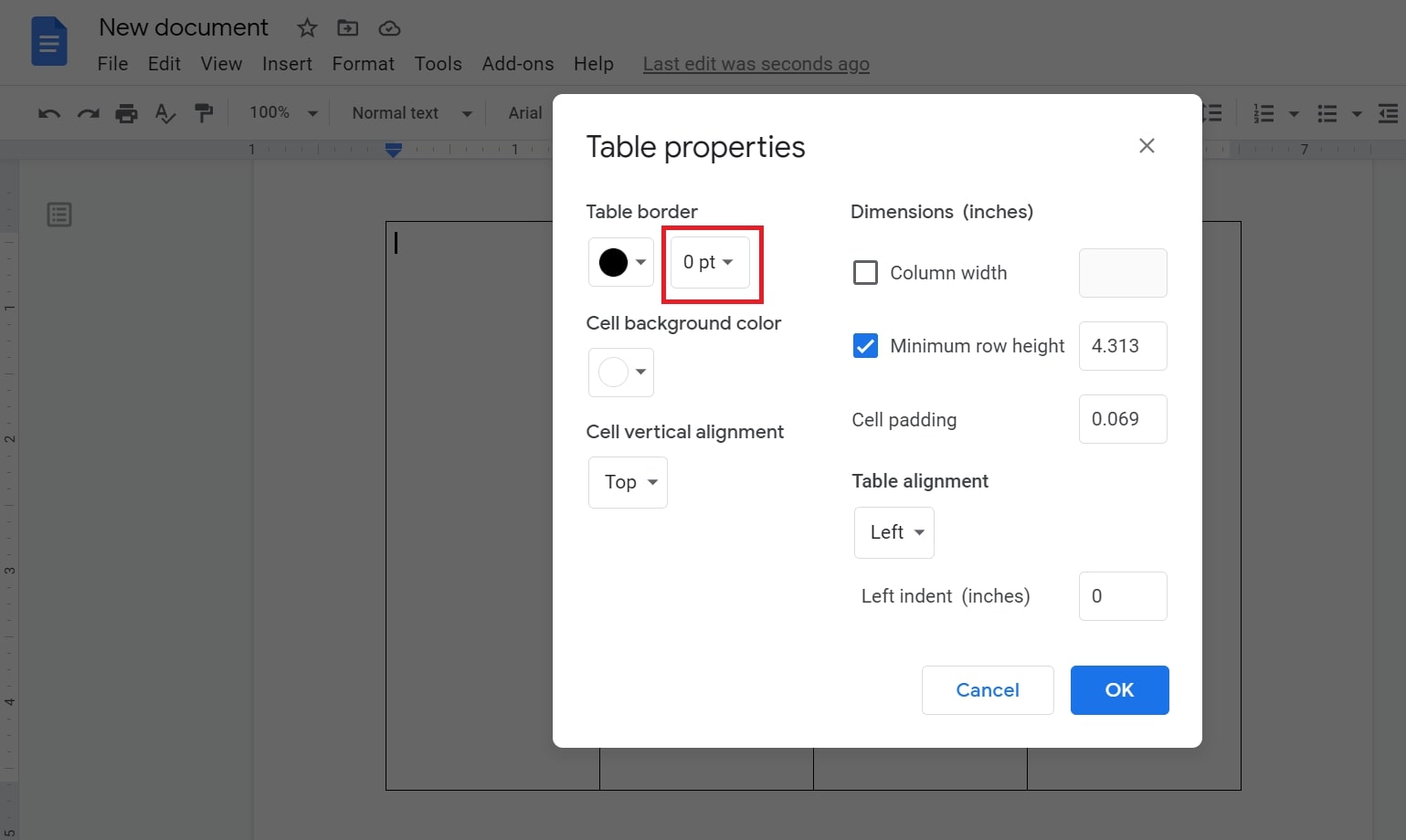 Step 5. Populate the four cells in the table with text as per your requirements. 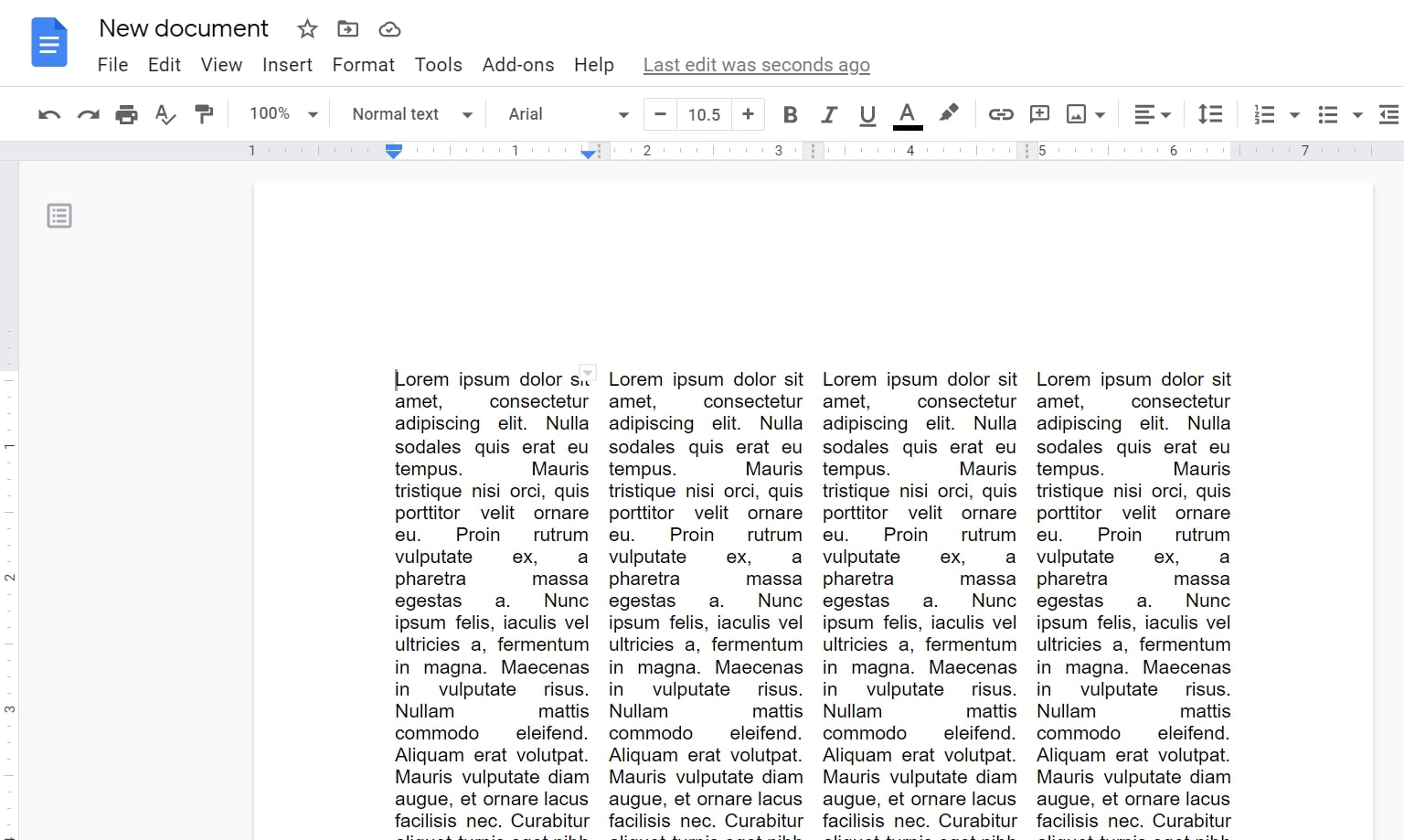 ⇾ How to Double Space in Google Docs‍

⇾ How to Add Page Numbers in Google Docs‍

⇾ How to do Subscript and Superscript in PowerPoint‍