What abt the carefully built $5bn spaceship campus? 🧐https://t.co/vnetISvRJ1


In an interview yesterday, Tim Cook said that he was mighty impressed by how they were able to launch products on time this year despite the crisis & sudden remoteness. He also said that there will be permanent changes around the way they work given the clear benefits of working virtually.


But what about famed $5bn Apple park? 🏢 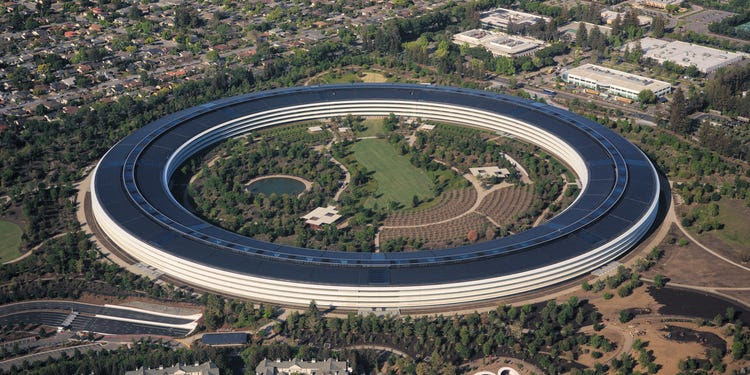 Apple has always been vocal about the benefits of being in-office. And this goes back to 2010 when Steve Jobs was planning their headquarters, the Apple park, in Cupertino (also known as the Apple spaceship). Here's an excerpt from his biography by Walter Isaacson -

Over and over he would come up with new concepts, sometimes entirely new shapes, and make them restart and provide more alternatives ... the Apple spaceship was shaped like a huge winding racetrack made of three joined semicircles around a large central courtyard ... "It permits serendipitous and fluid meeting spaces" he said ...

In fact, Jobs had pursued a similar goal in early 2000s when he was the CEO of Pixar - creating an office designed around a central large space to promote unexpected meetings.

The new 'spaceship' campus opened in 2018, which is notoriously expensive btw, is no exception and is built with similar principles in mind. So what happens to this investment if Apple goes remote in future?

Physical presence at the office is irreplaceable 👨💼

Yes, Tim Cook also said this in the same breath. He still strongly believes that chance encounters & brainstorming discussions can only happen through physical presence in an in-office setting and there's no way it can be replaced.

So it is quite unlikely that we'll see an extreme move from Apple around remote working, if any at all, in future.

Spontaneity is easy and possible with remote work, if that’s what you value ... Have more casual conversations. But don’t let it happen too often - there’s real work to do.

1. Virtual Reality & its significance for remote work, particularly in context of FB's recent launch of a VR office called 'Infinite Office'. Quick disclaimer on Cybersickness too.

2. The paradox of choice for note-taking apps ranging from Notion to Roam Research and a ton of others in between.

3. Estimated reading times for articles and if or not it helps.