We've spoken a lot about permanent changes in the way we work and companies recognising & embracing virtual work due to the sudden remoteness situation. From having regular virtual meetings to finding the best ways to onboard new hires, changes are being made. In line with this, there's also a huge amount of work/ progress happening around digital products specific to remote working.

Two major announcements in the last couple of days:

Okay, let me break this down further.

Currently, video conference apps like Zoom use popular compression techniques like H264, HEVC etc. to transmit video. While these techniques are amazing by themselves, they are standards laid down to tackle all possible use cases and not just conference calls (think streaming movies on Netflix).

Nvidia has gone a step further and optimised these compression techniques specifically for video calls which are distinctly categorised by a human face and a static background. So it detects your face & transmits only the relevant data.

How much improvement in virtual meetings are we talking about? 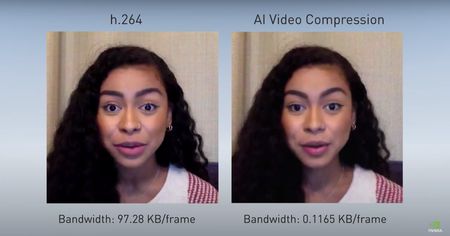 That's 800x improvement! Of course that won't be true for the entire video & Nvidia claims at least 10 times less data consumed for your existing video calls.

What does this mean for video calls & when will I see a change?

Nvidia is offering access to its platform which will enable apps like Zoom to use Nvidia's compression techniques & reduce the bandwidth usage for video calls. What this effectively means is that you will see much lower lag on video and possibility to have video calls instead of audio-only calls when you have poor connectivity.

When we will see this happen really depends on how fast video conferencing apps adopt this technique, if at all.

2. There's redesign across these products to make them more integrated e.g. creating a doc from your chat window in Gmail.

3. Finally, there are some new features which are more like finishing touches to their existing products e.g. user tagging on Google docs or previewing another document inside of a doc.

Why Workspace and is this even significant?

Clearly, Google is competing with the likes of Microsoft Teams/ Office 365 to provide a more holistic experience to its business users. This is in line with the rise in remote working and predicting large shift towards virtual work/ collaboration. The rebranding also makes sense since 'Workspace' aligns more with virtual collaboration than 'Suite'.

But that's all to it for now. There's no ground-breaking features or significant upgrades to any of its existing products. Neither anything specific to remote working like Microsoft's Virtual Commute feature launched last week.

⇾ How to print Google Calendar, view or save it as pdf