How to Quote Messages on Discord‍

Find out how to quote messages on the Discord app using different methods such as Block quotes in Markdown, Quote chatbot, etc., through these simple steps.


Discord is a free chat app that is popular among gamers, who've taken to the platform since its launch to create shared ‘servers’ - or chat groups - about their favourite games and topics.

It’s also increasingly being adopted by teams and workers across the world due to its advanced functionality.

Discord offers extensive customisation via built-in themes (to change the app’s appearance) and markup-based text formatting options (like bold, italics, etc.), and much more. As Discord is an open API, it allows developers to unlock new levels of personalisation - and essentially create their own versions of the app.

One essential feature seen in other messaging apps like WhatsApp, Slack, and Skype is the ability to quote messages from others. For a long while, Discord didn’t have a built-in option to quote others’ messages. Hence, users, perplexed as to how to quote on Discord, had resorted to complicated workarounds like installing specific chatbots and code blocks.

However, now, Discord has finally introduced the ability for users to quote messages on the platform (be it in servers or direct messages) via an in-built feature. So, interested in learning how to quote on Discord? Read on to find out :)


Why would I need to Quote someone’s messages on Discord?


There could be many reasons why you might need to quote someone else’s message on Discord while interacting in a group chat, among them:


How To Quote on Discord


As mentioned, Discord’s recently-introduced quoting feature makes it very easy to quote messages by others on your Discord server in your own message, by using markdown. However, there are also other methods you can use to quote on Discord: 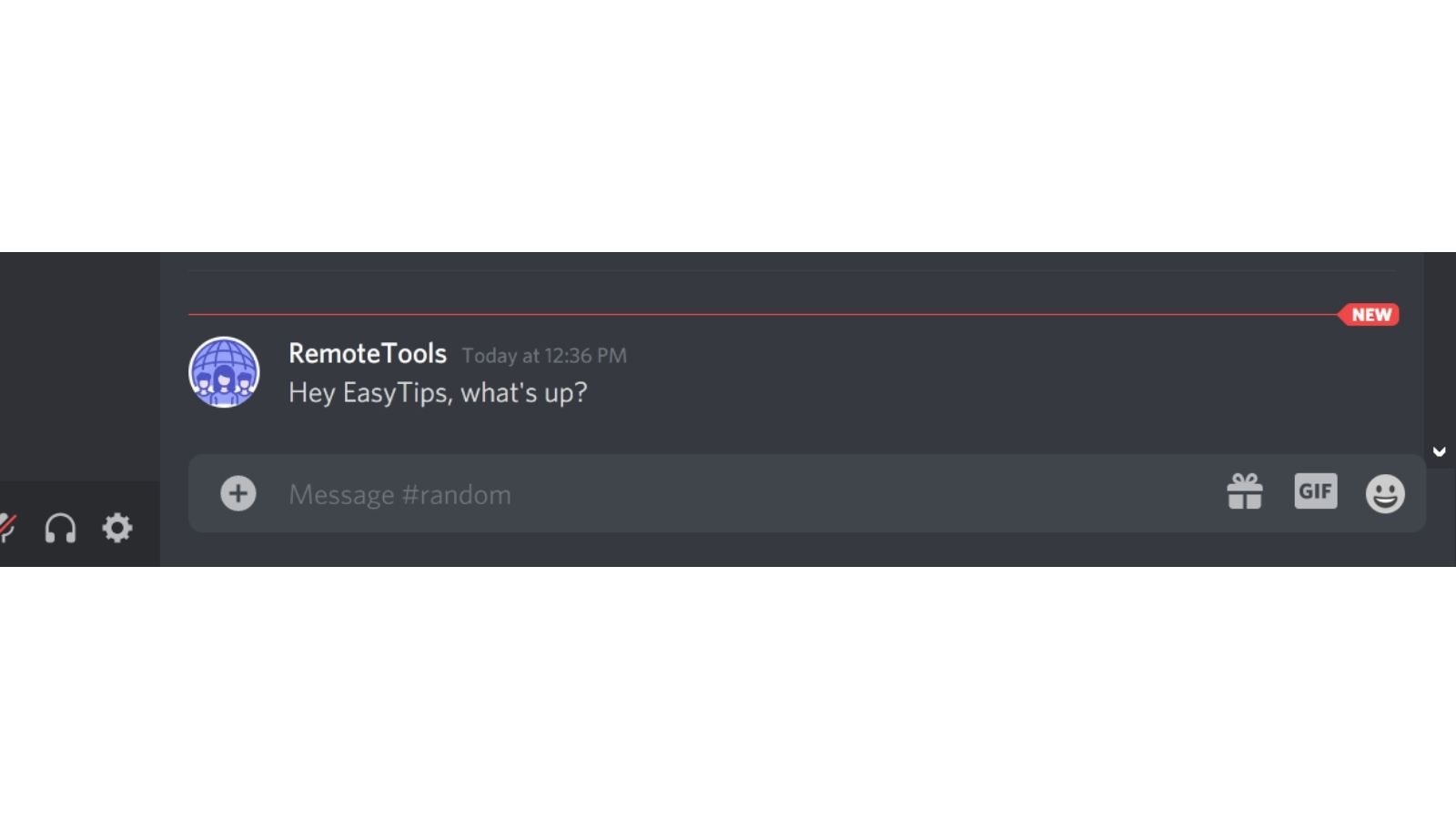 Step 2. Type ‘>’ in the message field, and then add a space after. (In the Discord desktop app or web app, you can also use ‘>>>’ and then a space to create a blockquote). 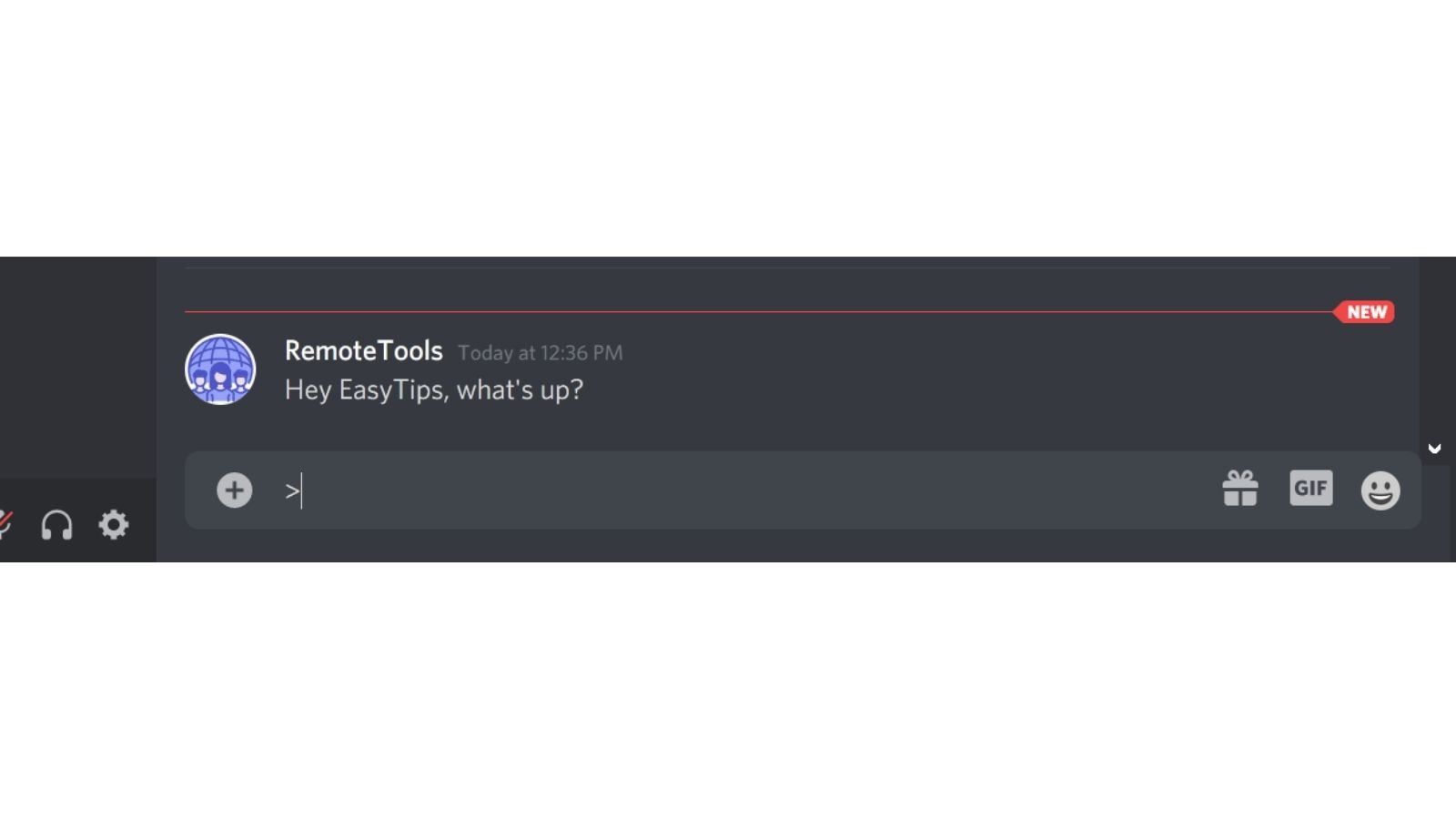 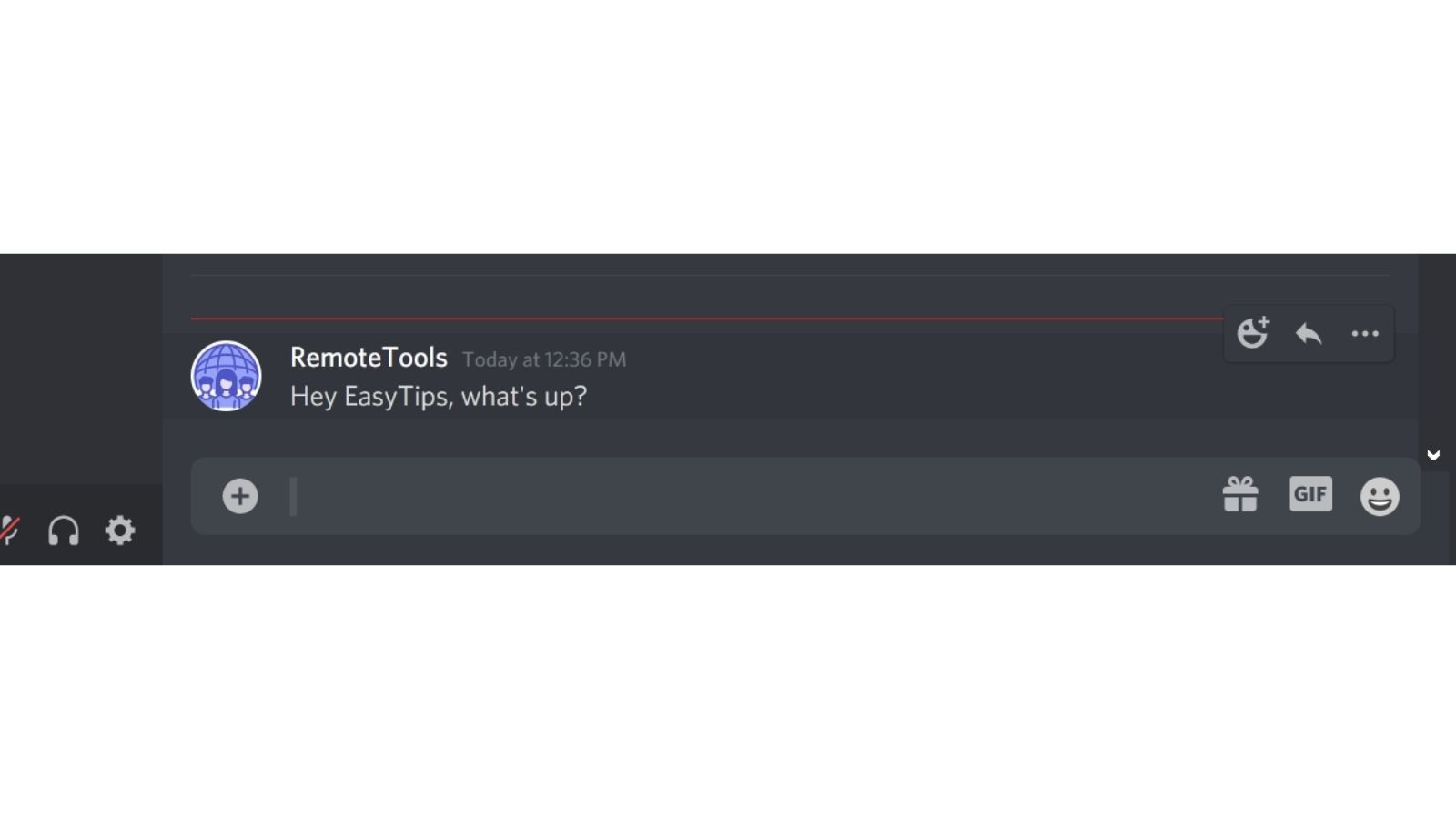 Step 4. Now, paste the message that you want to quote. 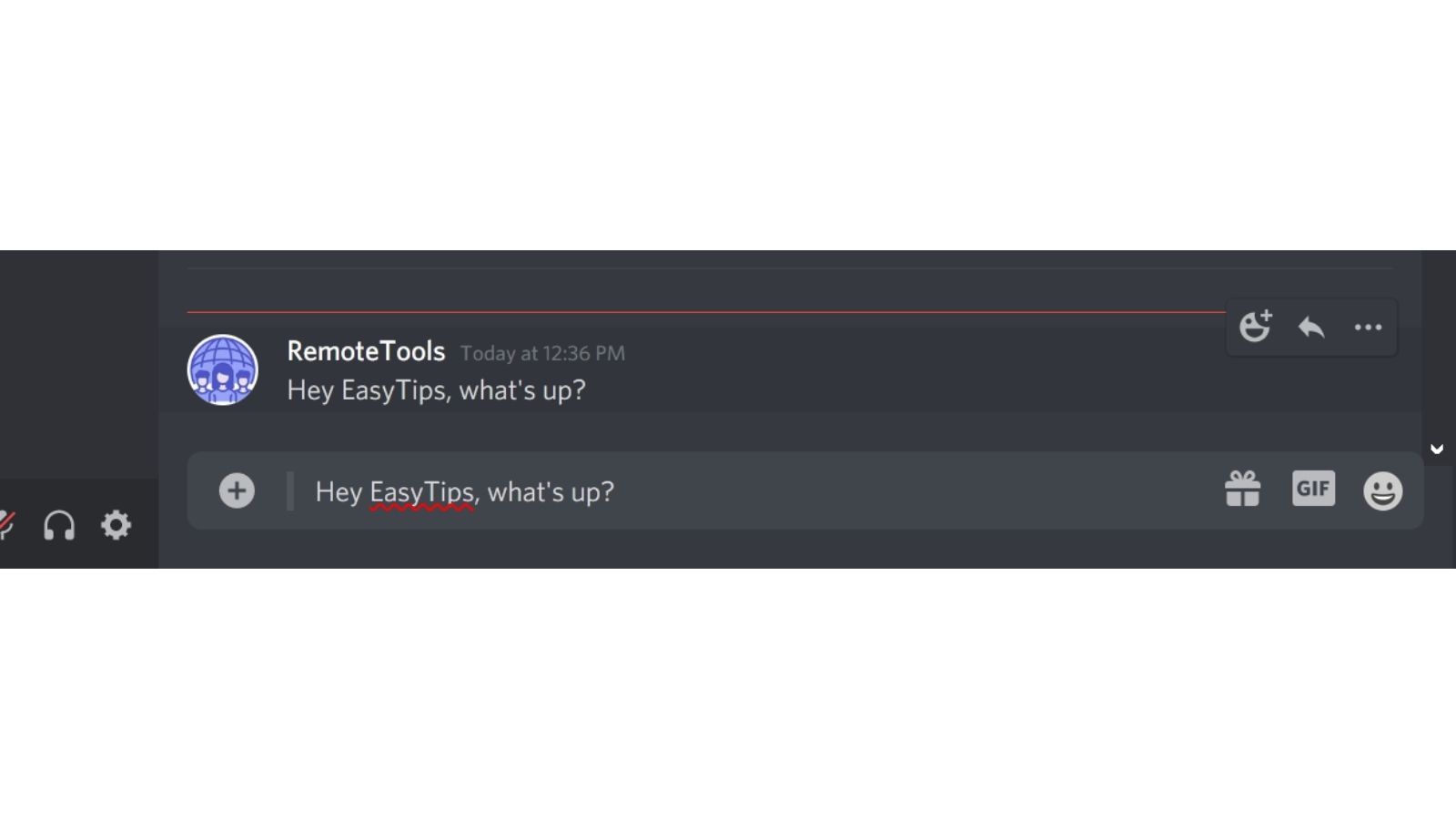 Step 5. Hit ‘Shift+Enter’ and write your own message in the new line. 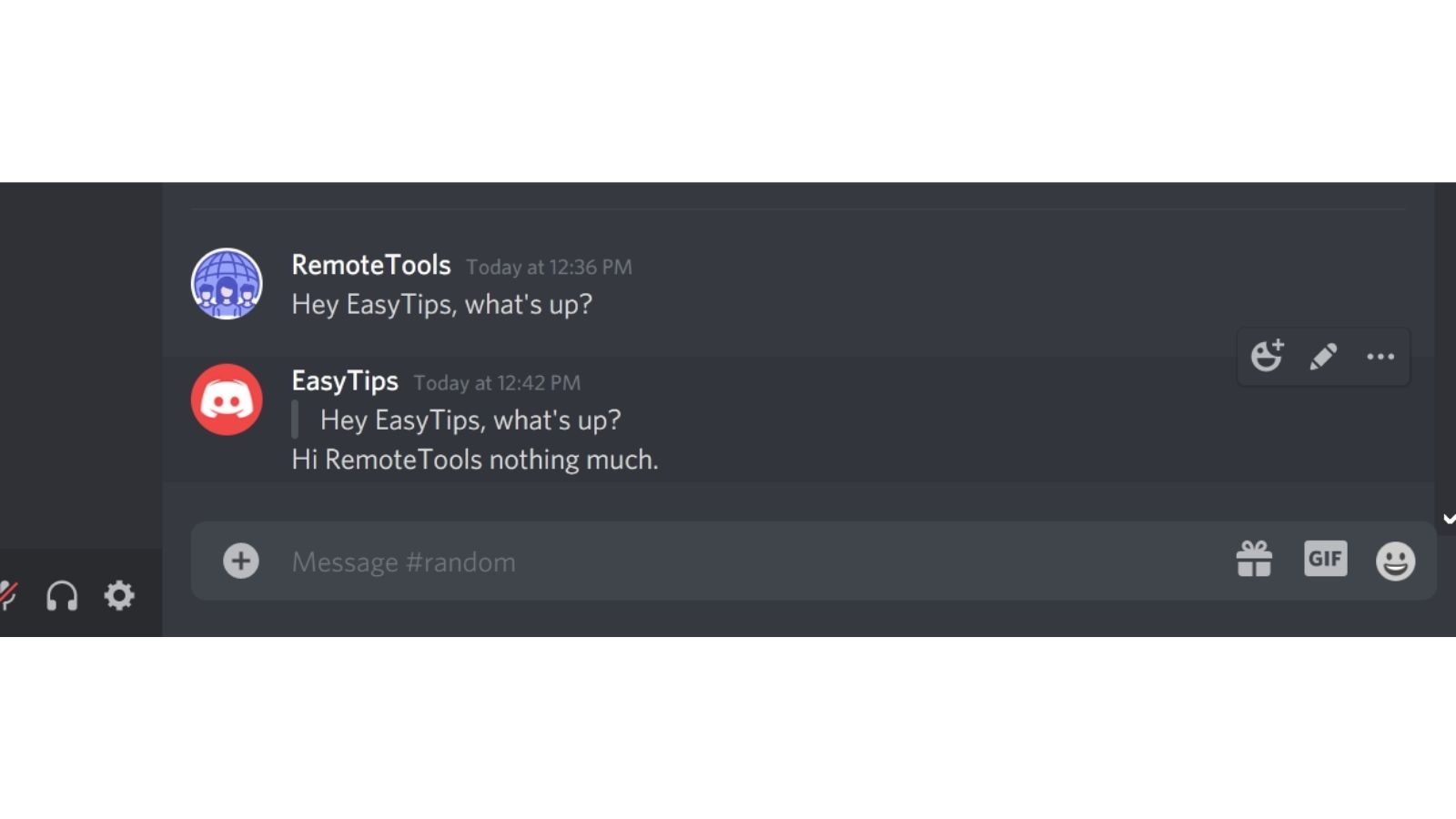 Note: Both the syntaxes ‘>’ and ‘>>>’ followed by a space, will create multi-line blockquotes if you’re using Discord on a PC or Mac. (On the Discord desktop and web app).


Code blocks are typically used on Discord, as well as other messaging platforms, note-taking apps, and text editors to add snippets of code in the text. Since code blocks are formatted differently from your regular lines of text, you can use them to indicate quotes.

Here’s how you can use code blocks to quote messages on Discord:

Step 2. Paste the message that you want to quote and enclose it between two back-tick symbols (`). For example, `quote`. 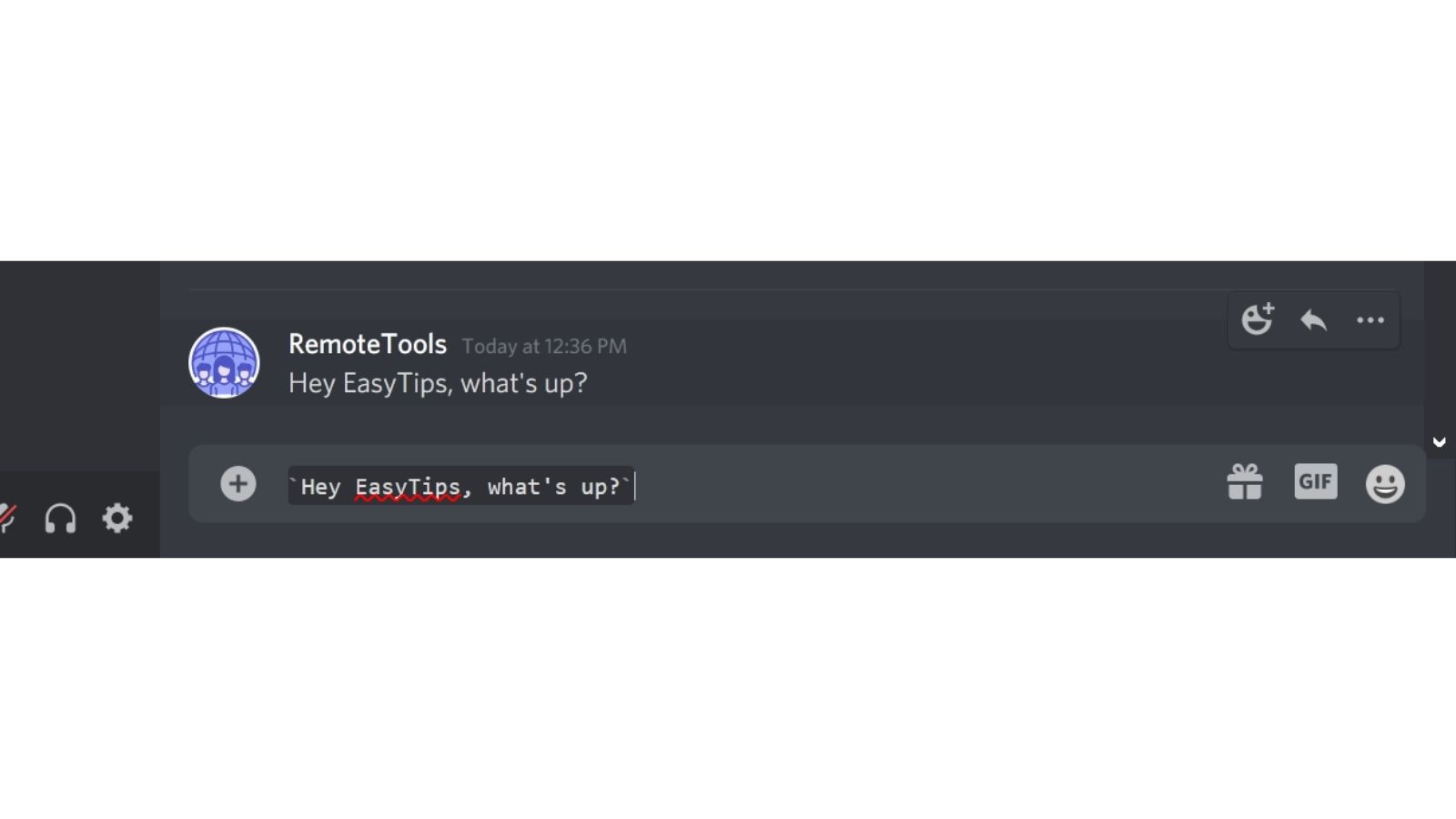 Step 3. Hit ‘Shift+Enter’ and type in your own message. 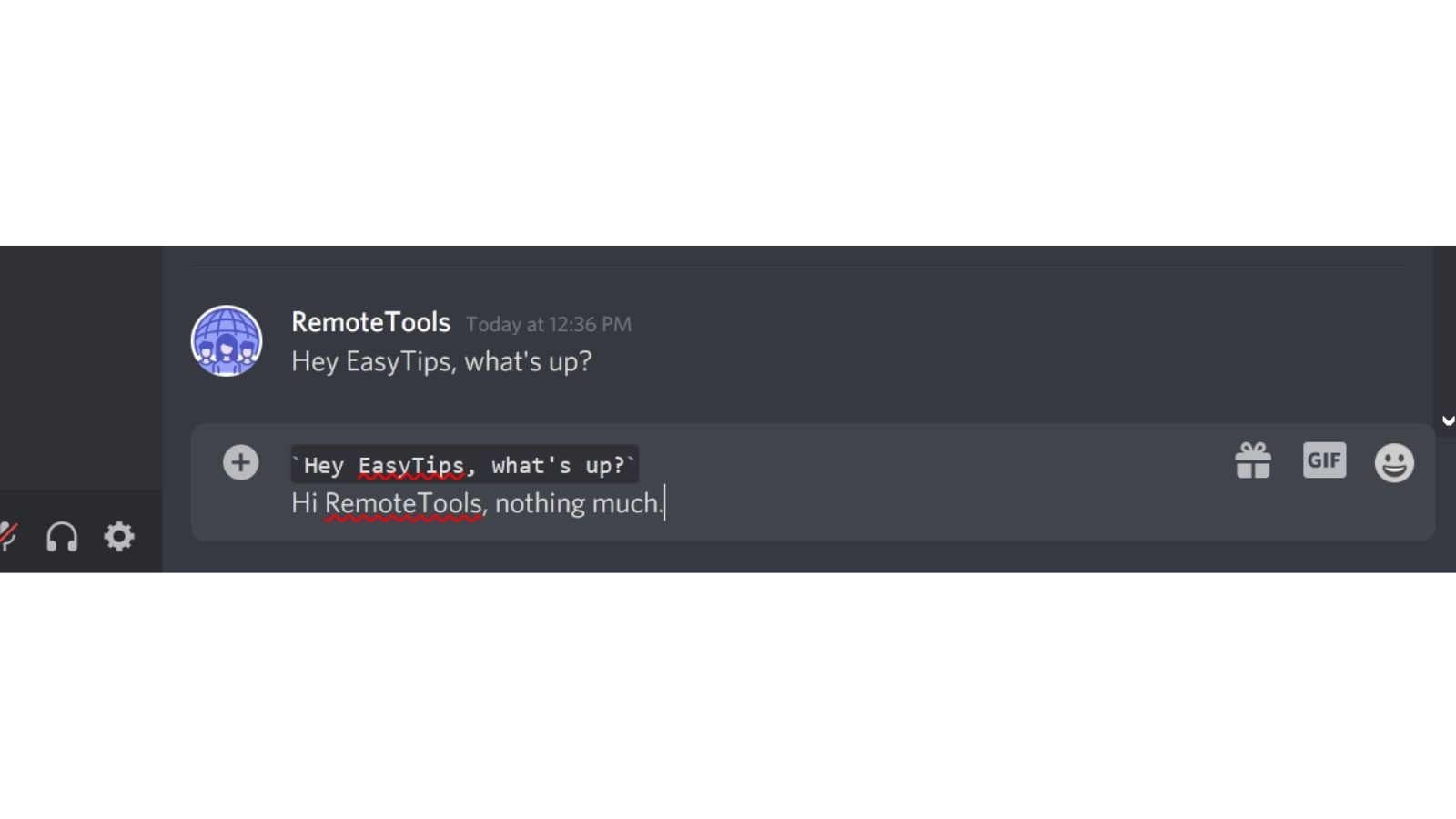 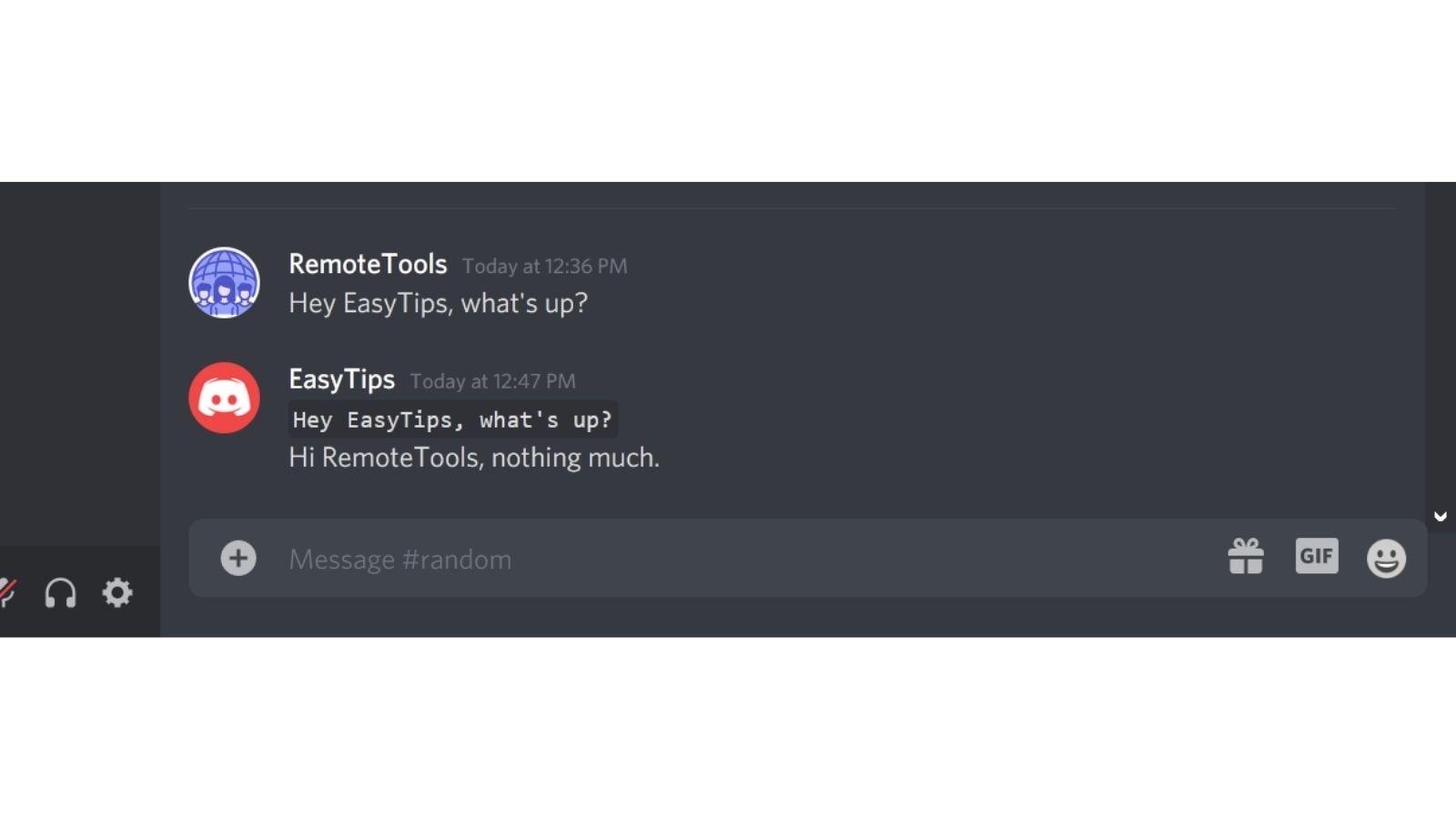 That’s it, the pasted message will now appear as a code block. While this is not the best way to quote messages on Discord, it certainly does the job.

Note: If you want to quote multiple lines of text on Discord, enclose it between two triple back-tick symbols, i.e., (```).


There are several bots created by independent developers available on Github, that you can install on Discord to get advanced quoting functionality.

However, know that you’ll need to have prior experience in downloading and installing custom code from Github projects.

You can try both of the following Github projects that offer quote functionality on Discord:

Disclaimer: Please make sure you understand Discord’s terms and conditions before installing custom clients and bots. We don’t recommend installing any custom Discord plugins if you don’t know your way around coding.


How to quote messages on Discord mobile app


You can use block quotes on the Discord mobile app (Android or iOS) in a similar way to how we’ve described in the steps for the Discord web or desktop app.

Step 3. Paste the message that you want to quote. (In the Discord mobile app, long press on a particular message to select it and tap on ‘Copy Text’). 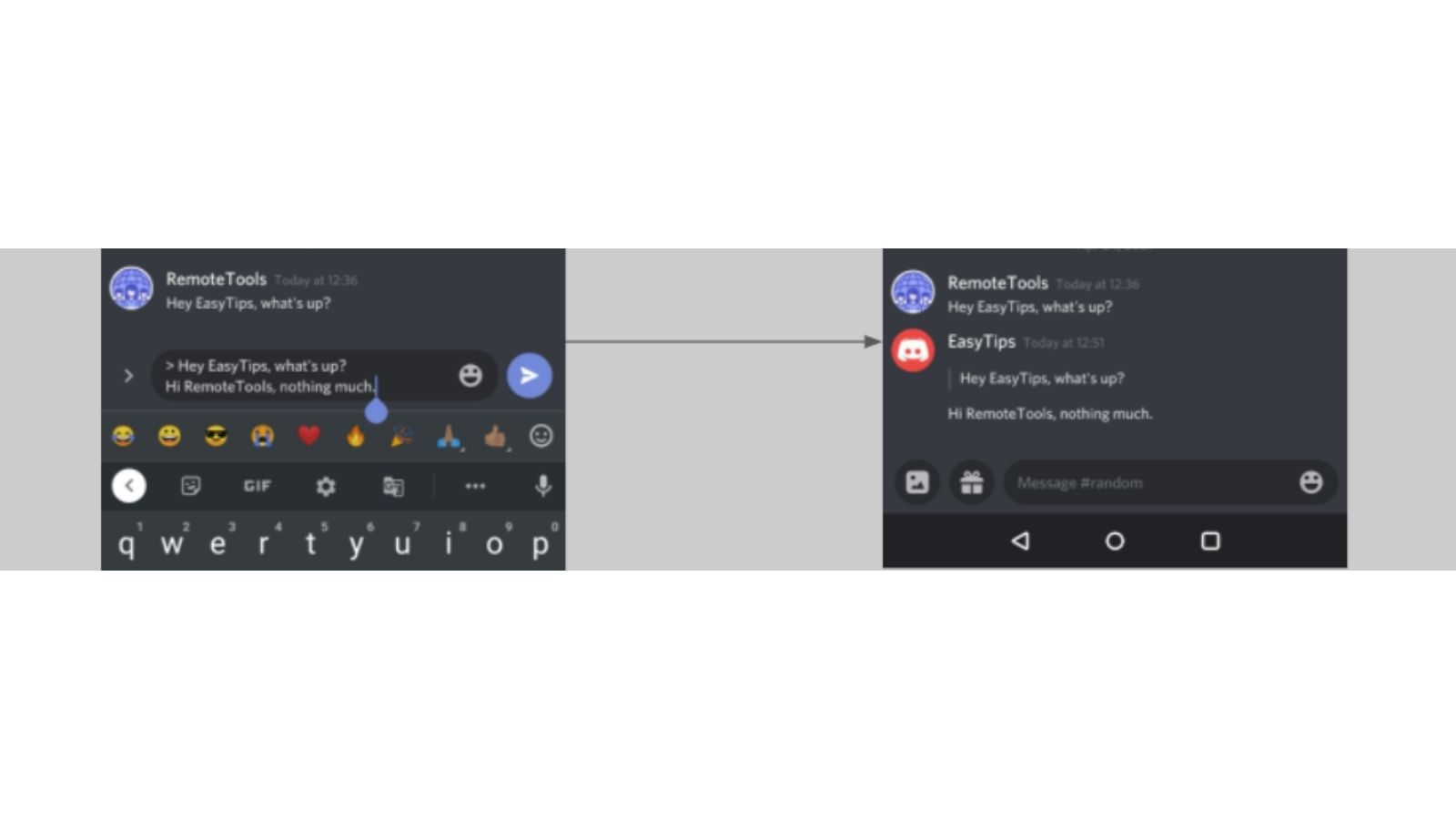 Step 4. Tap on the ‘Enter’ icon and type in your own message.

This is how the quoted message will appear:

Note:
There are two syntaxes for using Discord’s blockquote markdown in the Discord mobile app:


FAQs: How to quote on Discord


How to reply to individual messages on Discord?


As mentioned, you can use quotes as a way to refer to the previous message you’re replying to on a Discord server. However, Discord also provides a way to reply to messages directly within a server.

Step 1. Just hover over the message and click on the ‘Reply’ icon as shown. 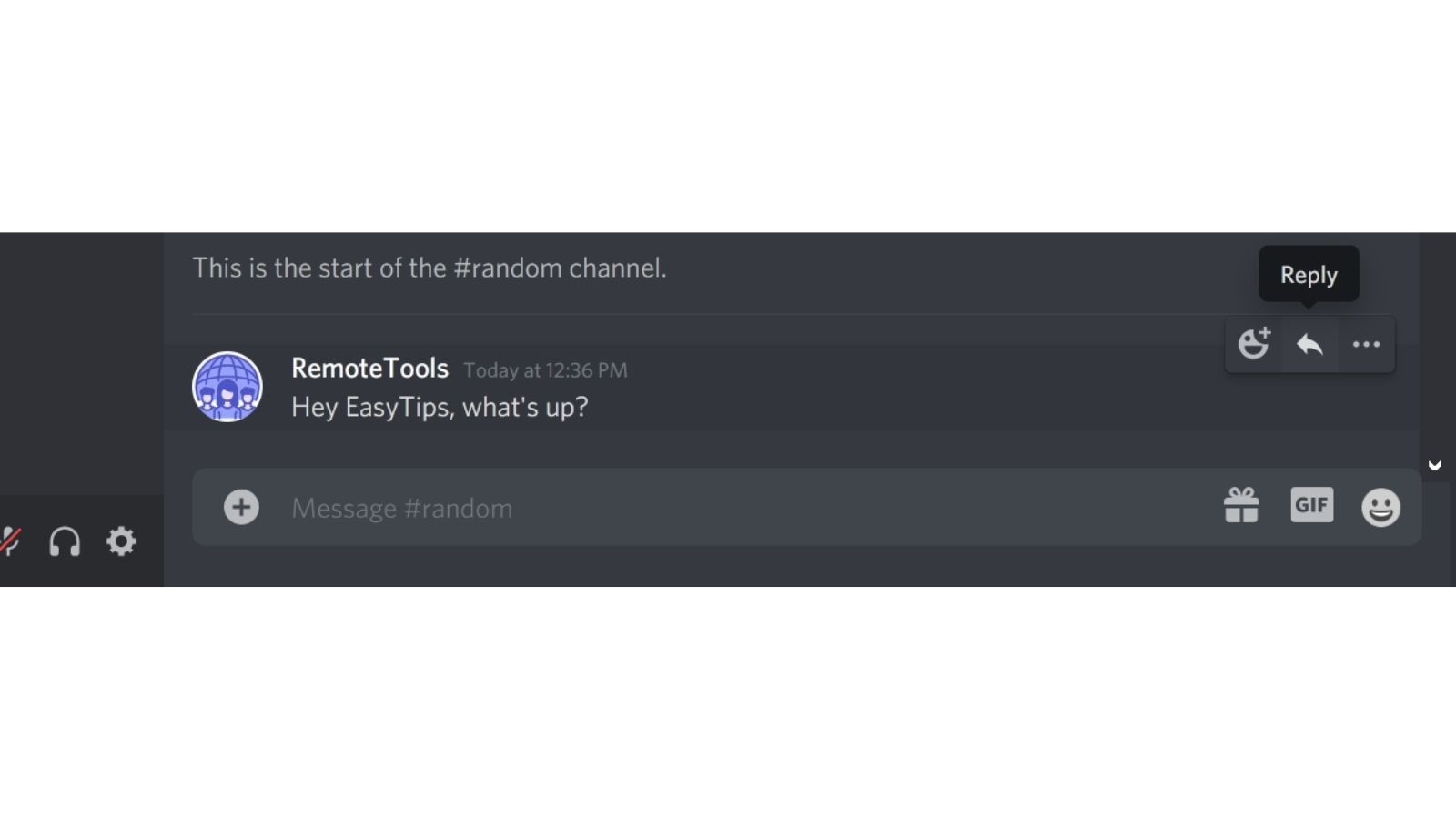 Step 2. Type in your reply message, and hit ‘Enter’. 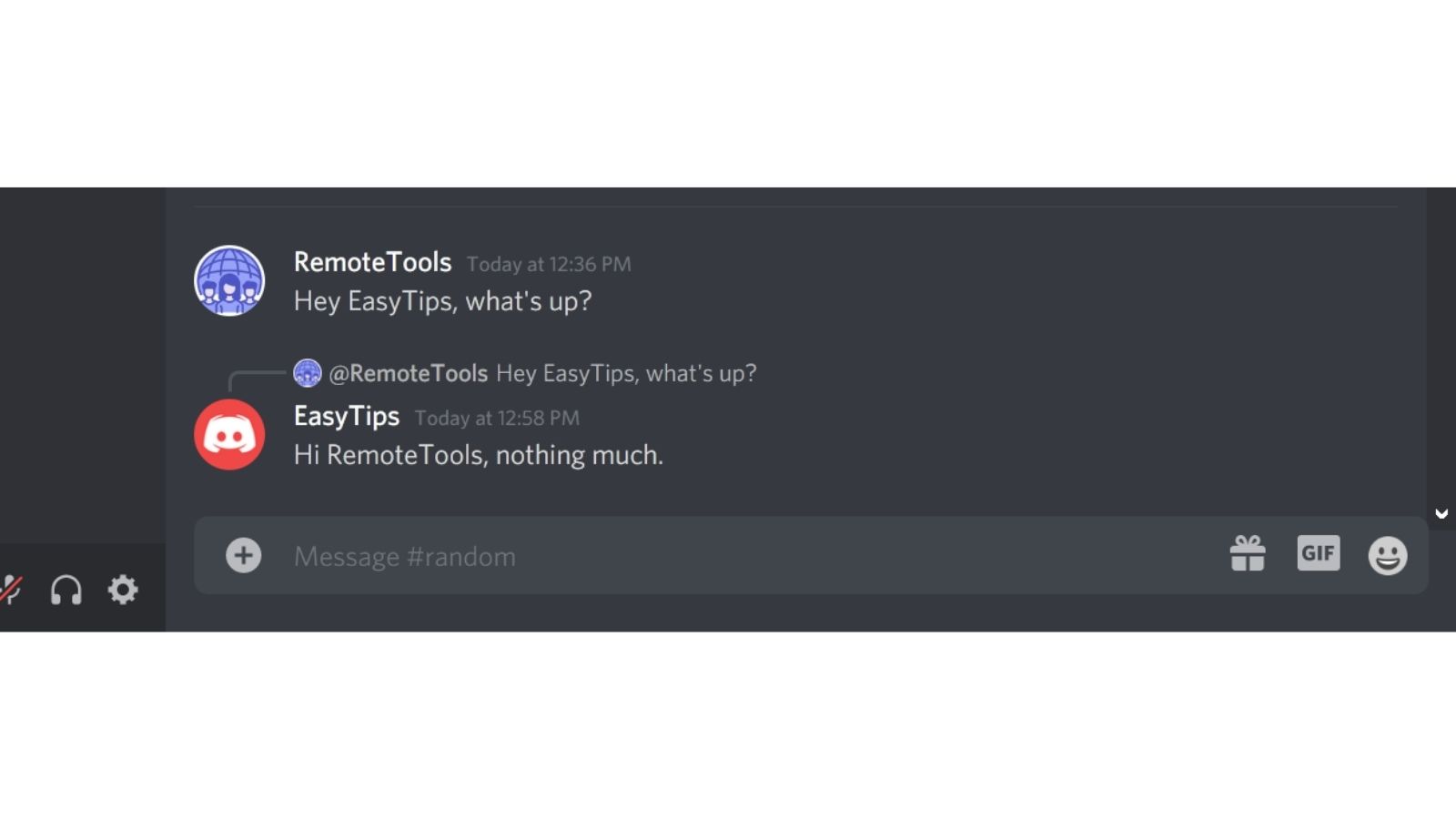 ⇾ How to Change your Nickname on Discord

⇾ How to Appear Offline on Discord

⇾ How much data does Discord use?

⇾ How To Ban (or Unban) Someone On Discord