How To Ban (or Unban) Someone On Discord‍


Discord is a messaging application that is widely popular among gamers across the world. Its advanced features and high level of customisability have also led more mainstream users and teams to catch onto it. So much so, that these days you’ll find a Discord ‘server’ - i.e., chat group - for just about any topic you can imagine, with hundreds of like-minded members.

Since it is an open API, Discord lets developers tweak a lot its appearance and functionality to virtually create their own versions of the app. Even for less tech-savvy users, it offers extensive customisation options via built-in appearance themes, markup-based text formatting options, and much more.

However, one key feature that makes Discord stand out from the rest, is the high degree of control it grants to server moderators. Discord lets moderators kick out or ban members who have violated the server’s rules of engagement - for offences like spamming, trolling, etc. Further, any user who violates Discord’s own policies gets IP-banned by the platform.


Types of bans on Discord


Note that there are two ways someone can get banned on Discord:


How can someone get banned on Discord?


There are many reasons why someone could end up getting banned on Discord:

Note that there are several other reasons why someone might get banned by their server administrators. It depends on the server’s rules of engagement and Discord’s own policies.


How to ban someone on Discord


Note: As mentioned, only server administrators or owners can ban members from a server.

Here’s how to ban someone on Discord on the desktop, web, or mobile apps, by following simple steps:


Step 1. Head over to the required server on Discord 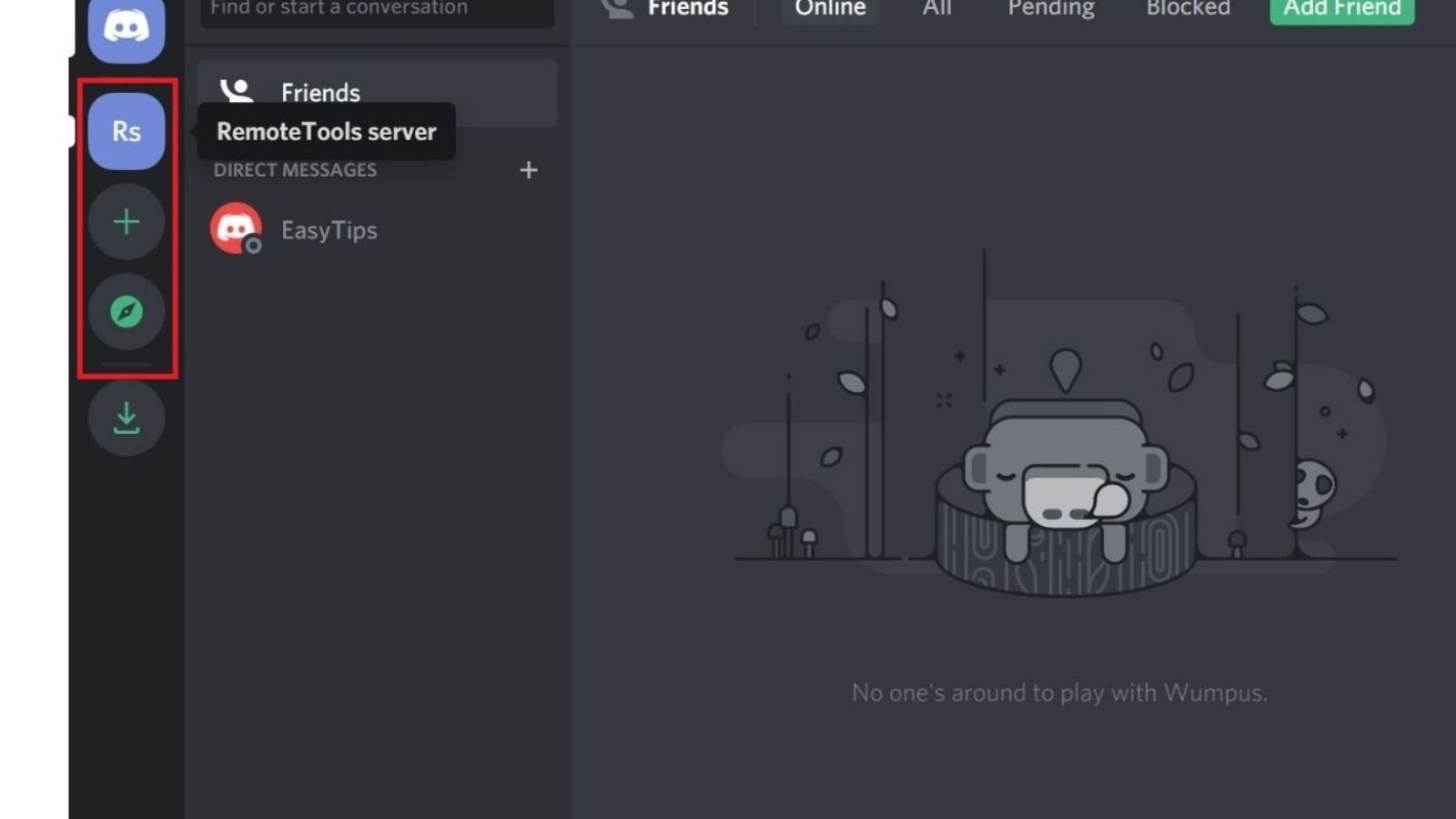 Step 2. In the right sidebar on the screen, right-click on the member you wish to ban 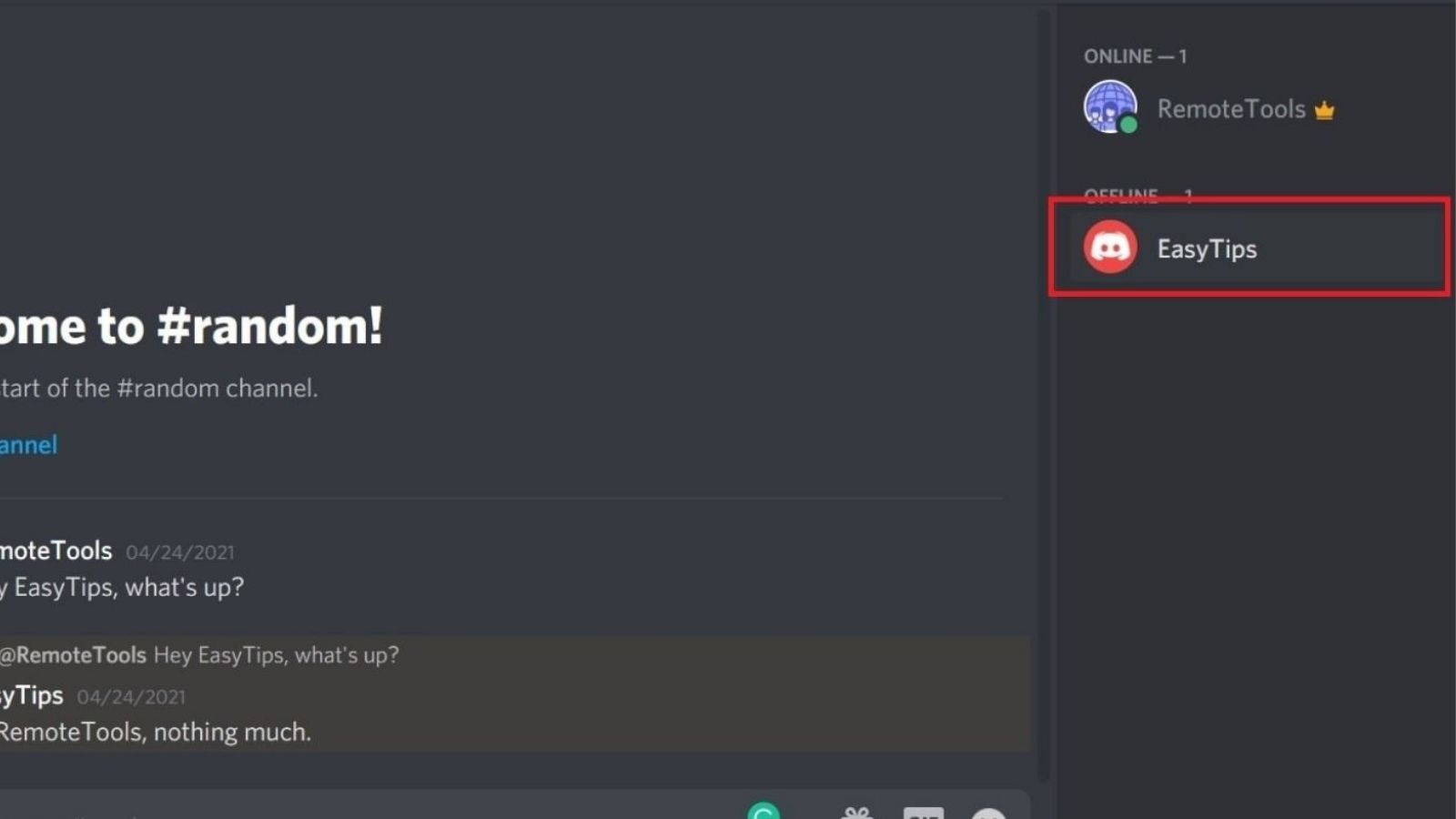 Step 4. In the dialog box that pops up, select the desired option under ‘Delete Message History’, and specify (optional) the reason you want to ban that member 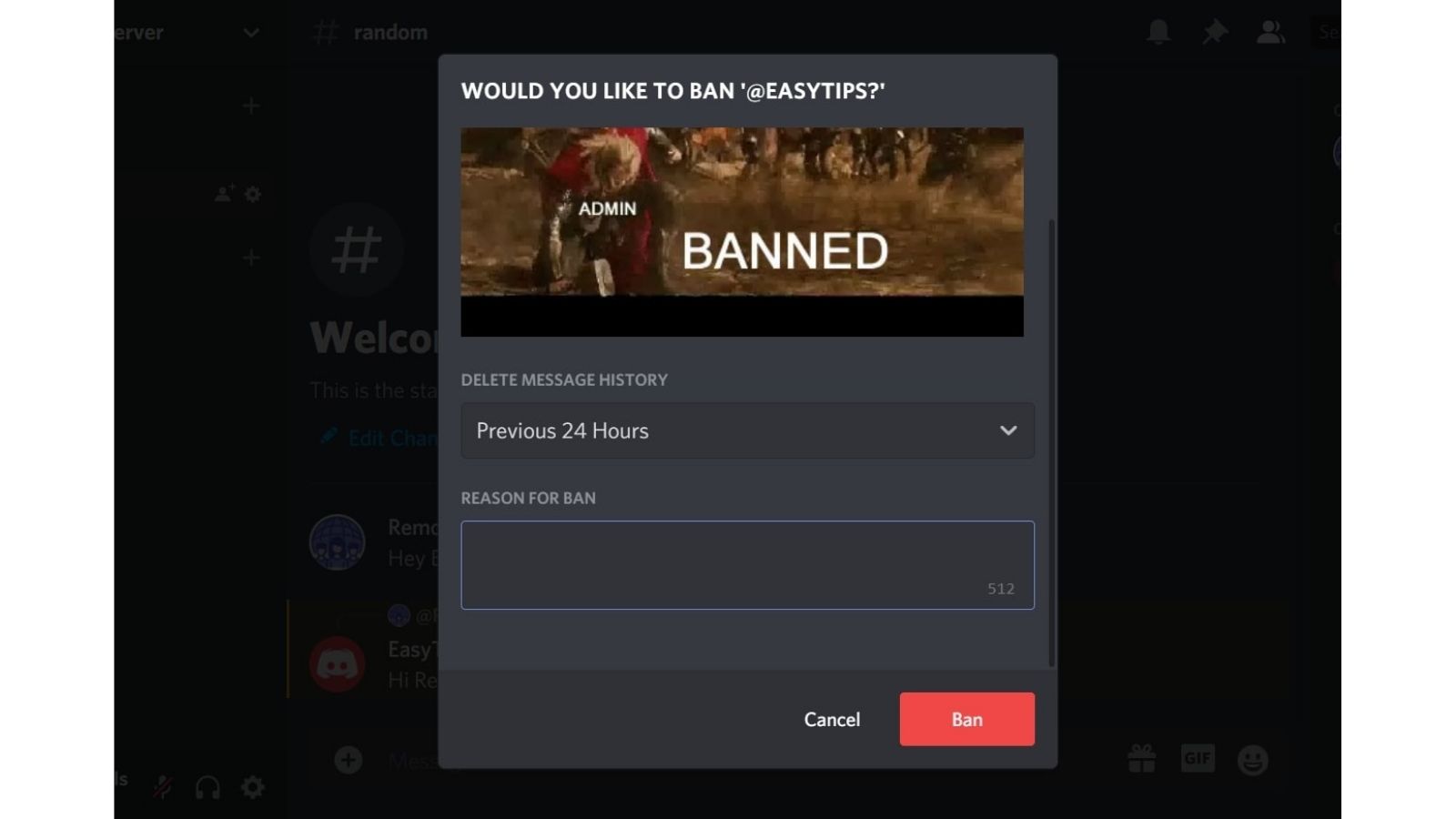 Step 5. Click on ‘Ban’, and they will be banned from your server


How to ban someone on Discord mobile app (iOS & Android)


Step 1. Navigate to the required server from the left sidebar

Step 2. In the channel screen, tap on the icon at the top-right corner 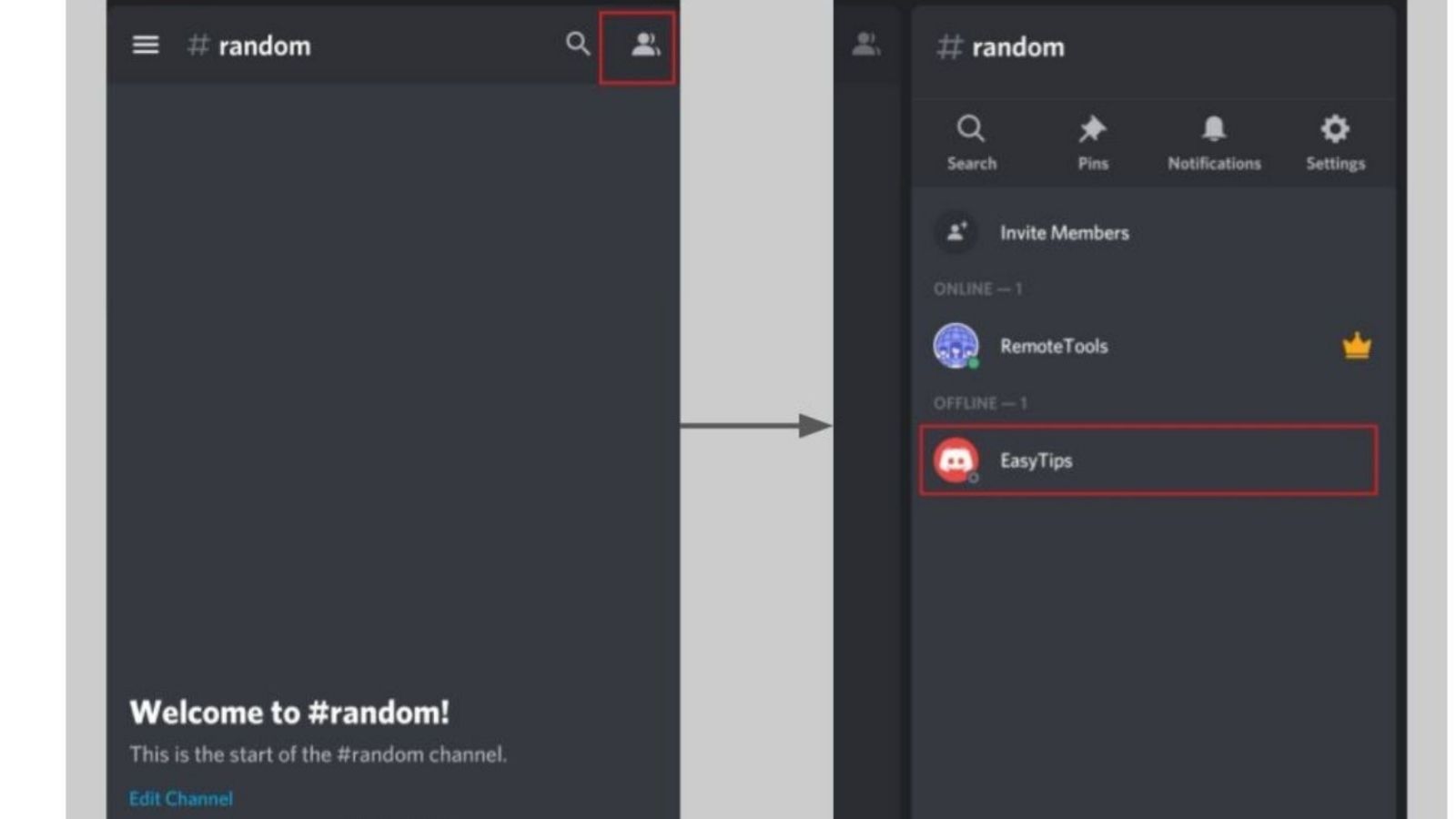 Step 3. Tap on the member you want to ban

Step 4. Tap on ‘Ban’ > choose the desired ‘Delete Message History’ option and enter the reason for the ban, if required

Step 5. Tap ‘Confirm’ to ban that member from the server


How to kick out someone on Discord


Only server administrators or owners can kick out someone from a server. To kick someone out from your server, just follow the above steps, but choose ‘Kick’ instead of ‘Ban’.

However, note that if you kick someone on Discord, they will be able to rejoin your server again with a new invite. But if you ban them, they won’t be able to do so.


How to unban someone on Discord


Step 1. Go to the server from where you want to unban someone

Step 2. In the left sidebar, click on the down arrow next to the server name 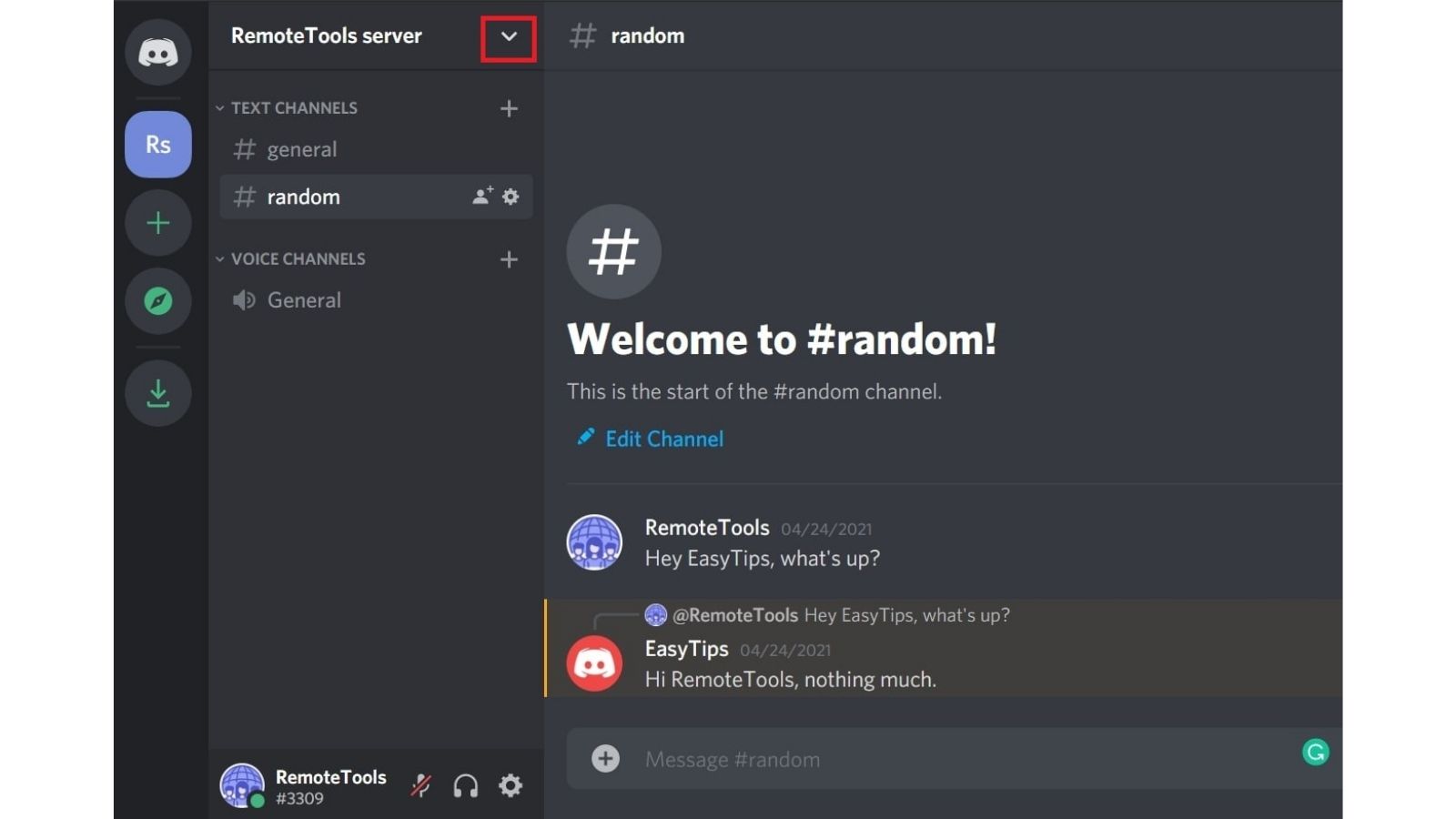 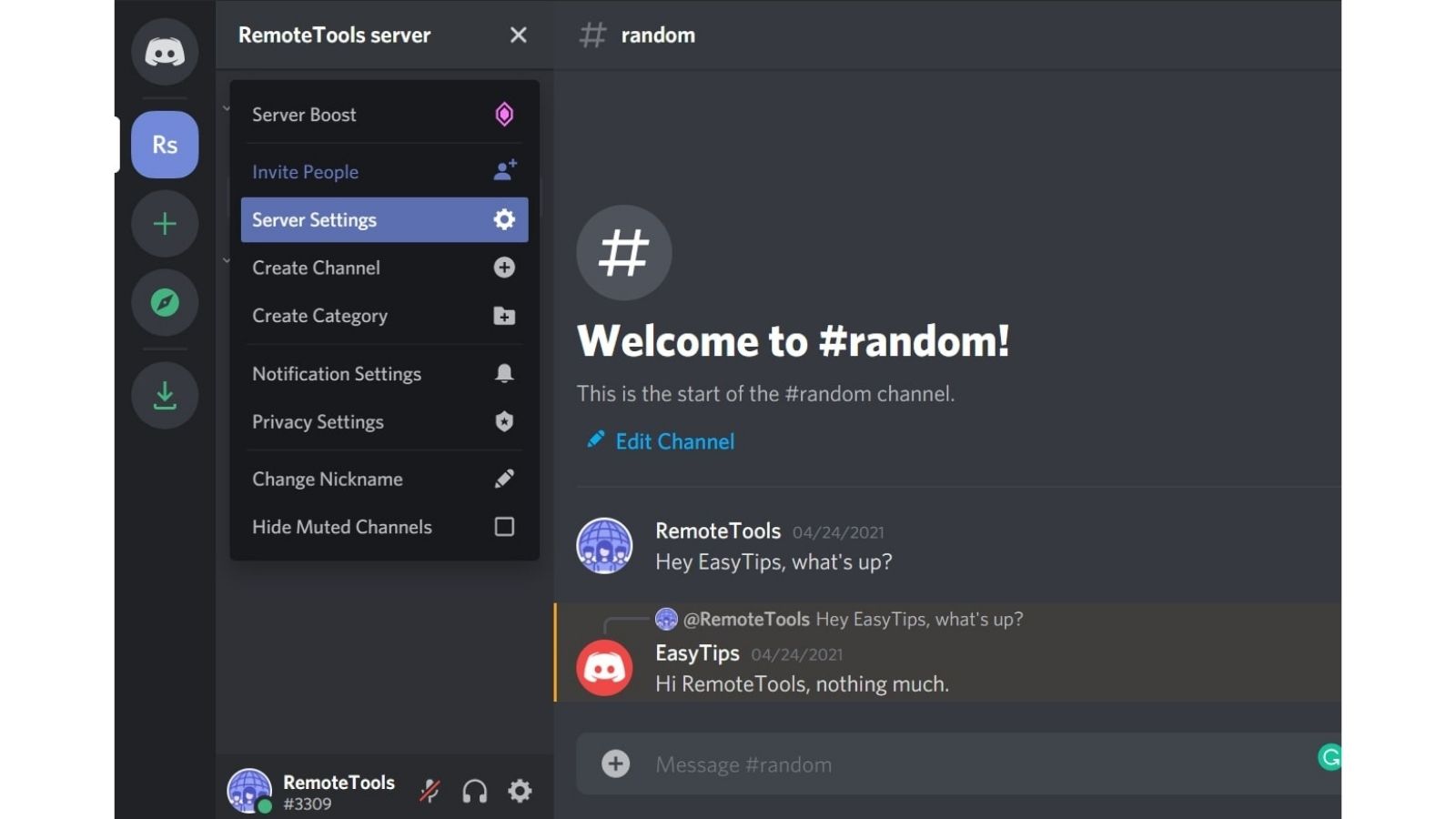 Step 4. Scroll down to and click on ‘Bans’ at the bottom left of the page menu 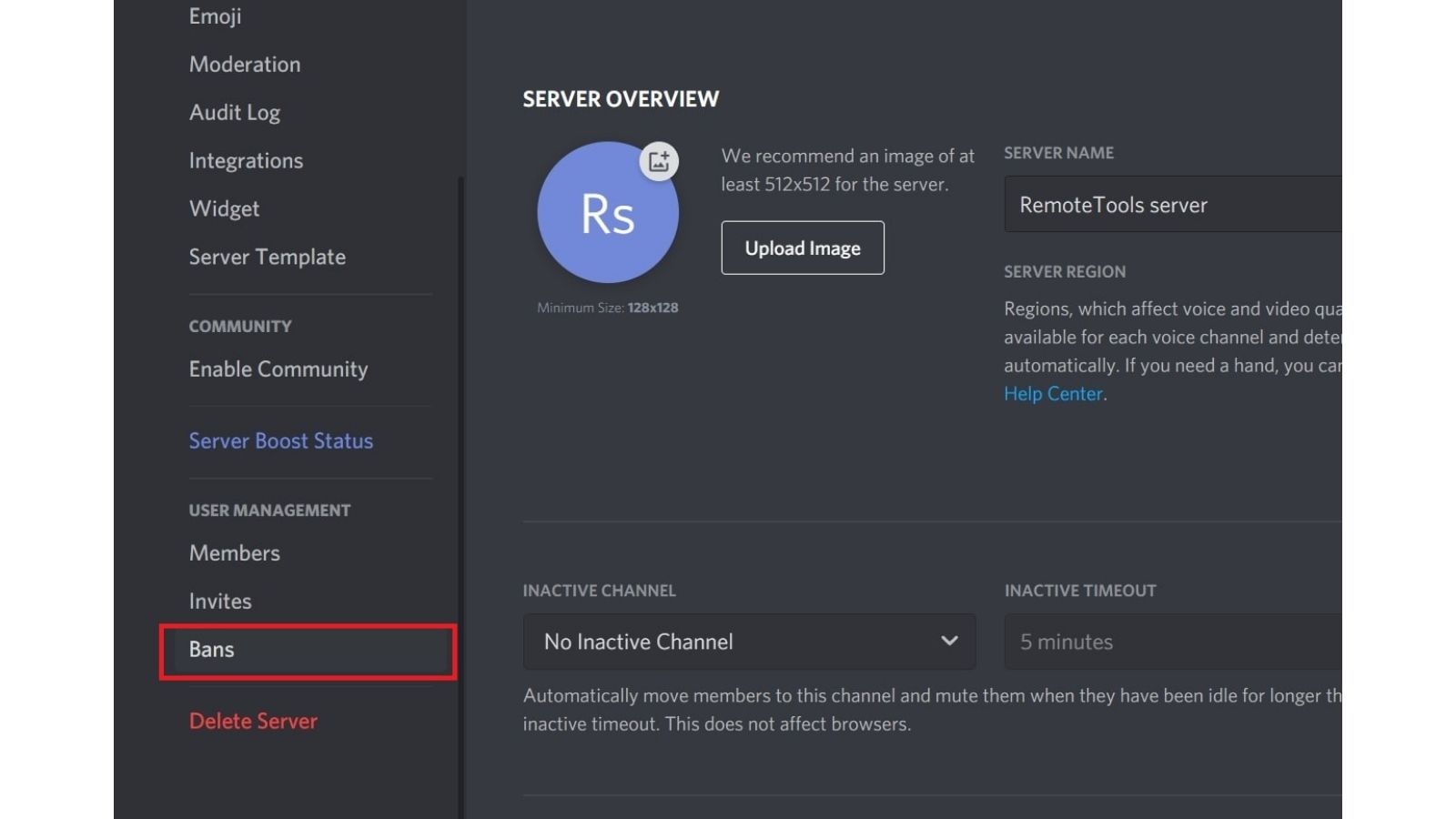 A list of banned members will now appear on the right.

Step 5. Click on the member you wish to unban 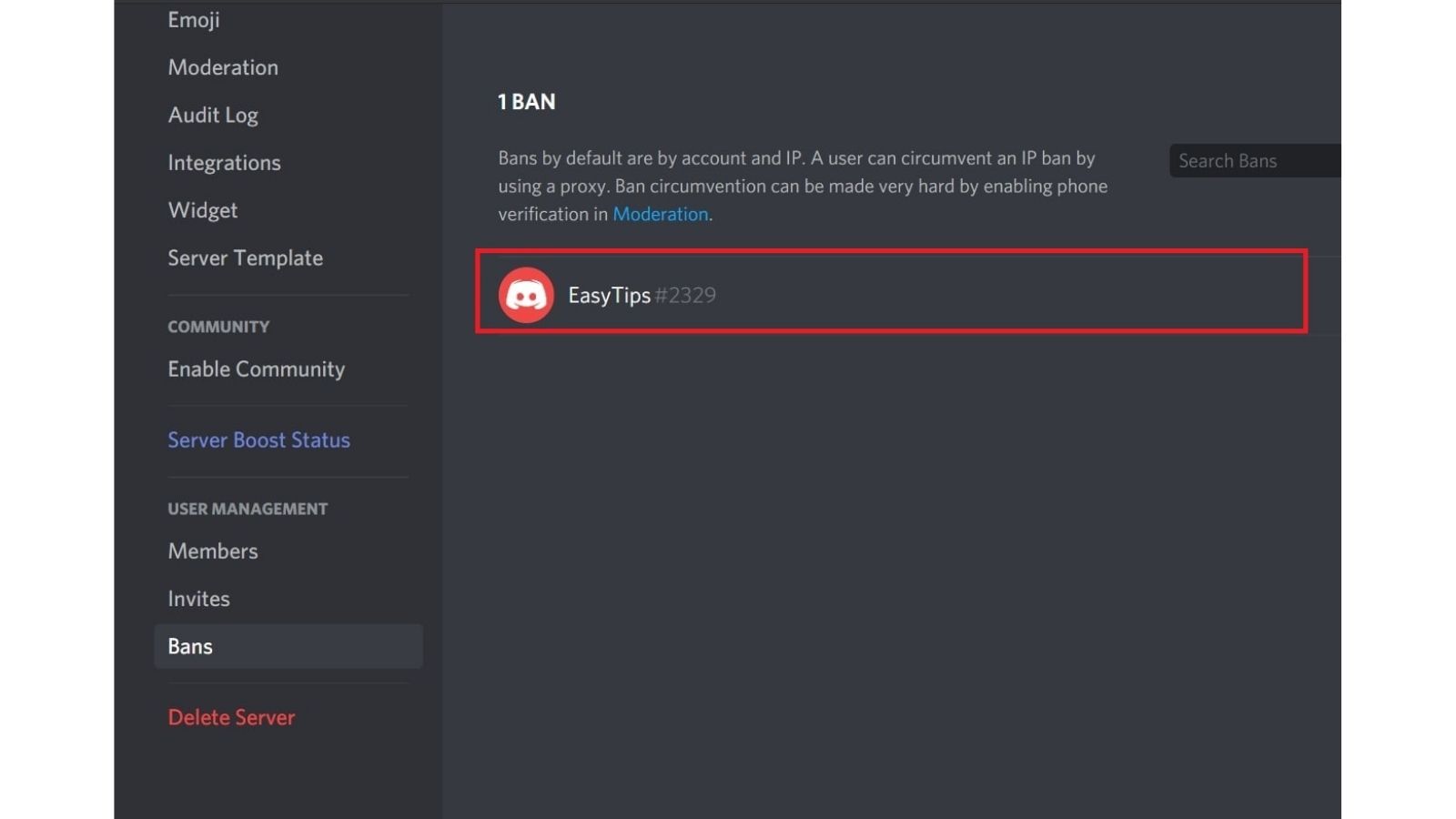 Step 6. In the pop-up dialog box, click on ‘Revoke Ban’ 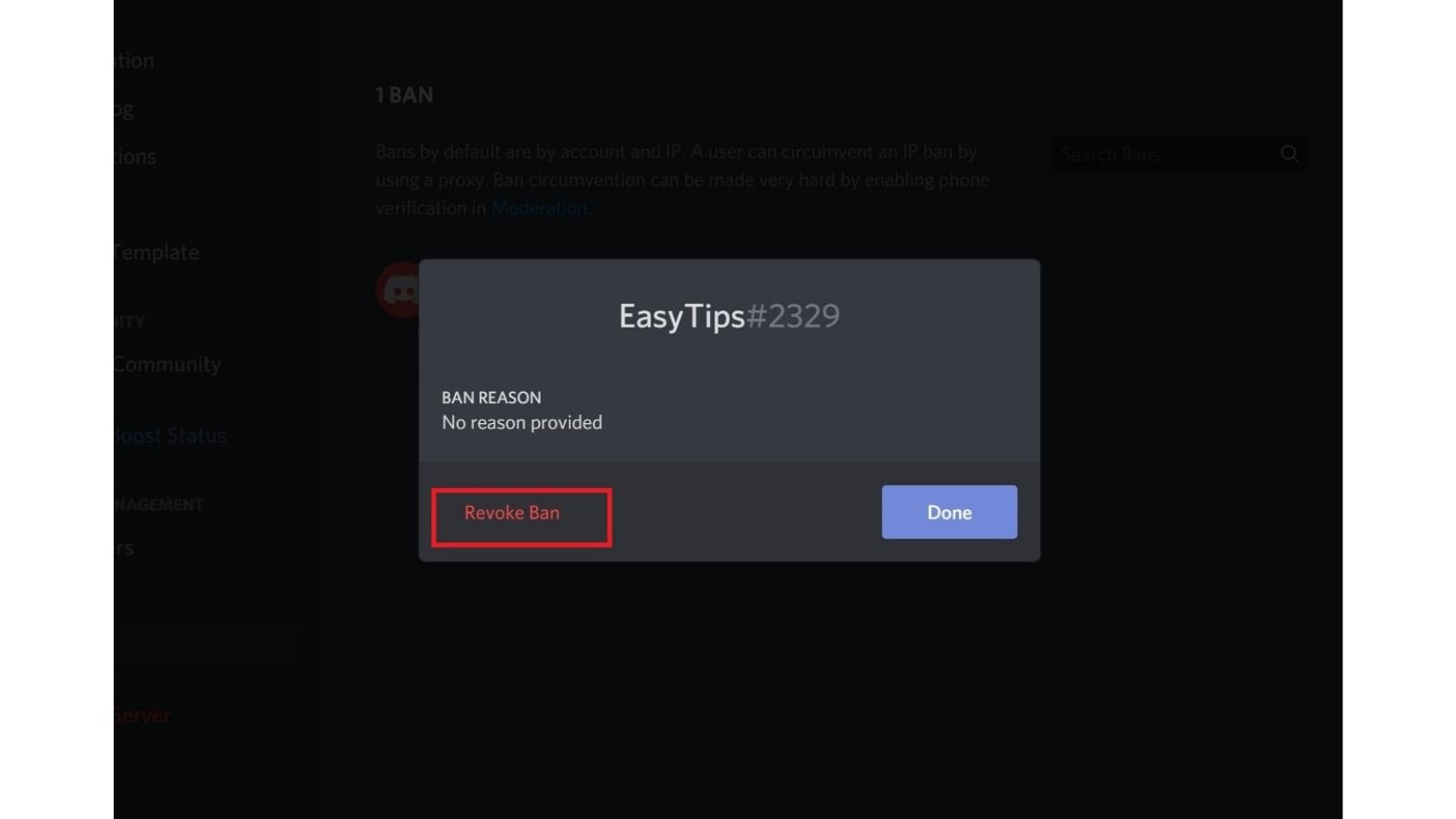 Note: If there are a lot of banned members, you can search for the user in the search box to then unban them.

That’s it, after you’ve unbanned the member, they will be granted access to use the server again.


How to unban someone on Discord mobile app (iOS & Android)


Step 1. Navigate to the required server using the left sidebar

Step 2. Tap on the three-dot icon in the left sidebar next to the server name 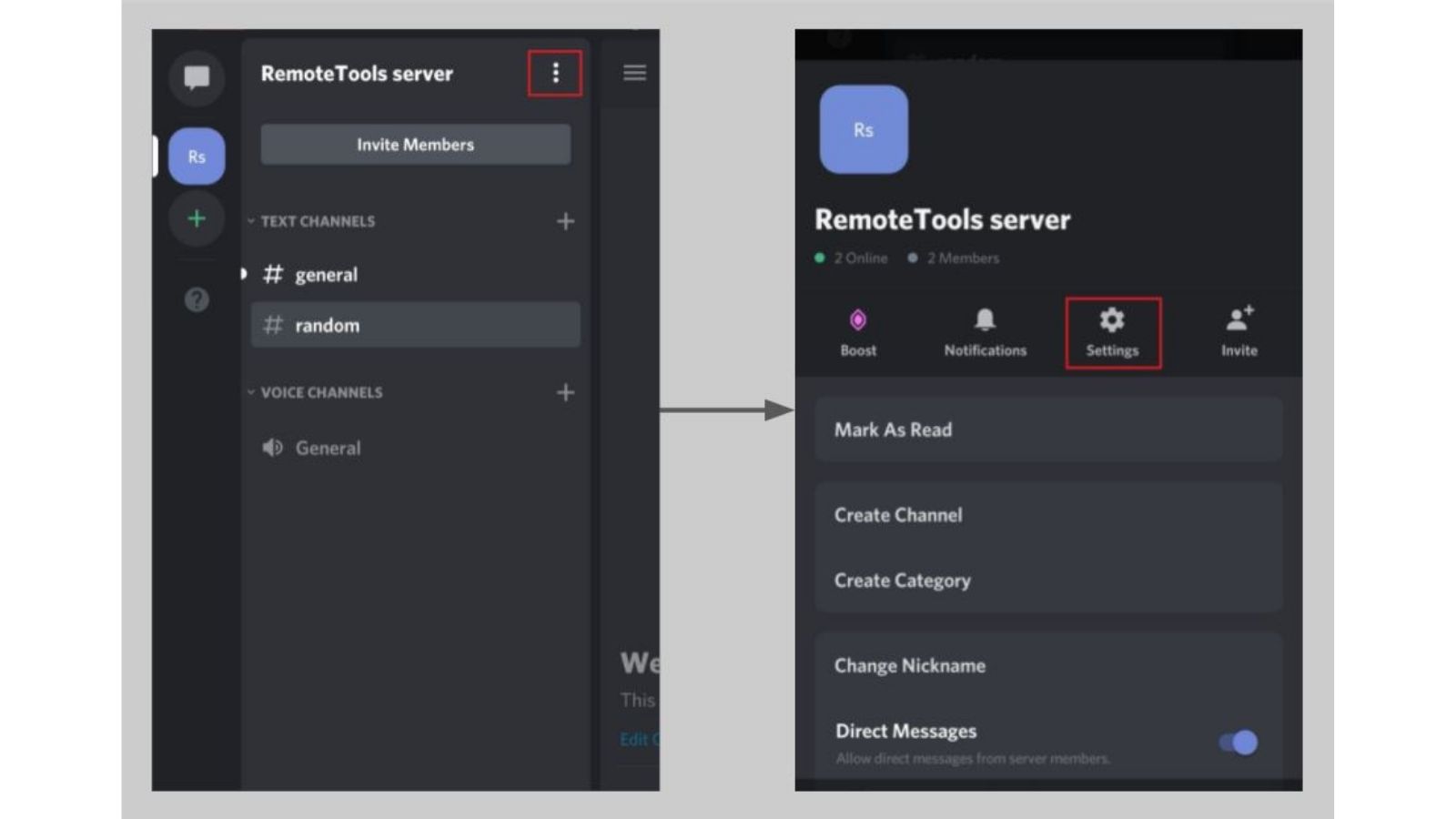 Step 4. Scroll down and tap on ‘Bans’ 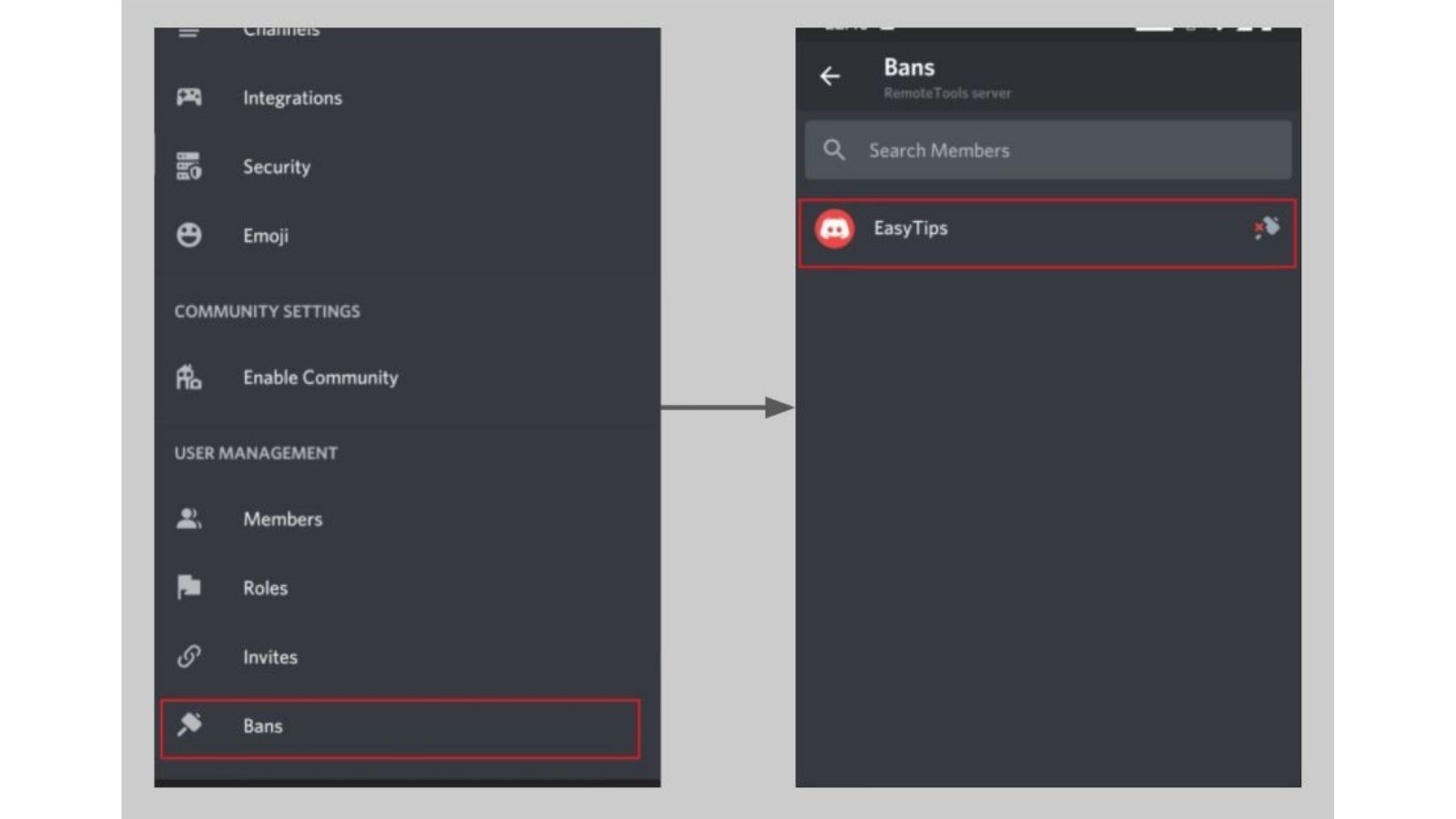 Step 5. Tap on the member you want to unban from the server

Step 6. In the dialog box that pops up, tap on ‘Unban’

That’s it, the member will now be able to access your server again.


How long do Discord bans last, and are bans permanent?

Also, note that members can’t just create another account to log back in and join the server again, as Discord bans their IP address.


What happens if you ban someone on Discord?


If server administrators ban a particular member on Discord, then that member will no longer be a part of that server. They won’t be visible on the server members list and will lose access to the server - meaning they can’t post messages on that server’s channels, see messages, send, or get voice chats.

Further, banned members won’t be able to see other users of that server. If they try to re-enter the server via an invite link, they’ll be shown a message that the link has expired.


How can I get unbanned on Discord?


There is no way to get unbanned on Discord unless the server’s administrator decides to unban the member. So, a banned member will have to request the administrator to unban them, by reaching out to them via direct message and apologising for their actions.

However, if the server administrator has also blocked that member, the banned member can’t send direct messages to them. They’ll have to reach out via other platforms.


Can you ban someone again after unbanning them?


Yes, it is possible to ban someone on Discord again even if they’ve been banned and unbanned before.


What happens when you unban someone on Discord?


When you unban someone on Discord, that member will regain access to the server - they can post on the server’s channels, send and receive messages, enter voice channels, and will be listed as a member of that server.

Further, an unbanned member will be able to qualify for the role of administrator, moderator, or any other roles within the server.

⇾ How to change Discord background‍

⇾ How to use Twitch emotes on Discord‍