Discord Commands: List of the most useful Discord commands and how to use them‍

We’ve often highlighted why Discord is such an amazing app being highly customizable. If you’re an avid gamer, you probably agree that it’s the best gaming chat application out there at the moment. And rightly so, the features that are offered by Discord are simply best in class and enable you to have a super smooth gaming experience.

Discord is easy-to-use across platforms, consumes less data, ace in terms of privacy and offers all necessary features free of cost. Although the app was created primarily for gaming, it’s being widely used by all sorts of teams due to the features available.

In this blog we’re going to focus on one such feature that makes the Discord user experience amazing - Discord commands. Whether you are new to Discord commands or simply want to learn more about them, the below sections contain all you need to know. Also find a comprehensive list of Discord commands which you can also download!

What are Discord commands?


Discord commands are a set of operations you can perform by typing a minimum amount of words. As we know, commands are short directions to do something. For example, instead of specifying to your Discord app that you want to send a gif by writing multiple lines of code, you can simply type ‘/giphy’ to do so and enter the gif idea you have in mind.

Discord has a number of such commands, split into categories such as text commands, slash commands, etc. to give you a more custom and amazing experience.


How to use commands?


Using Discord commands is pretty simple. All you need to do is type your command into the server’s text box. Some commands are auto-suggested after just entering the slash (/) key whereas in the case of others, you would have to manually type the entire command.

Make use of various types of Discord commands to perform a number of situations that come up when using the app. Or you can use commands to simply have fun with your server members.


Making custom Discord commands isn’t the simplest of tasks as it involves a bit of coding and is best left to developers.

But you can make use of the Discord role bot, MEE6, to create custom commands to use in your server. Note that you need to be the owner/ moderator of the bot to do so. 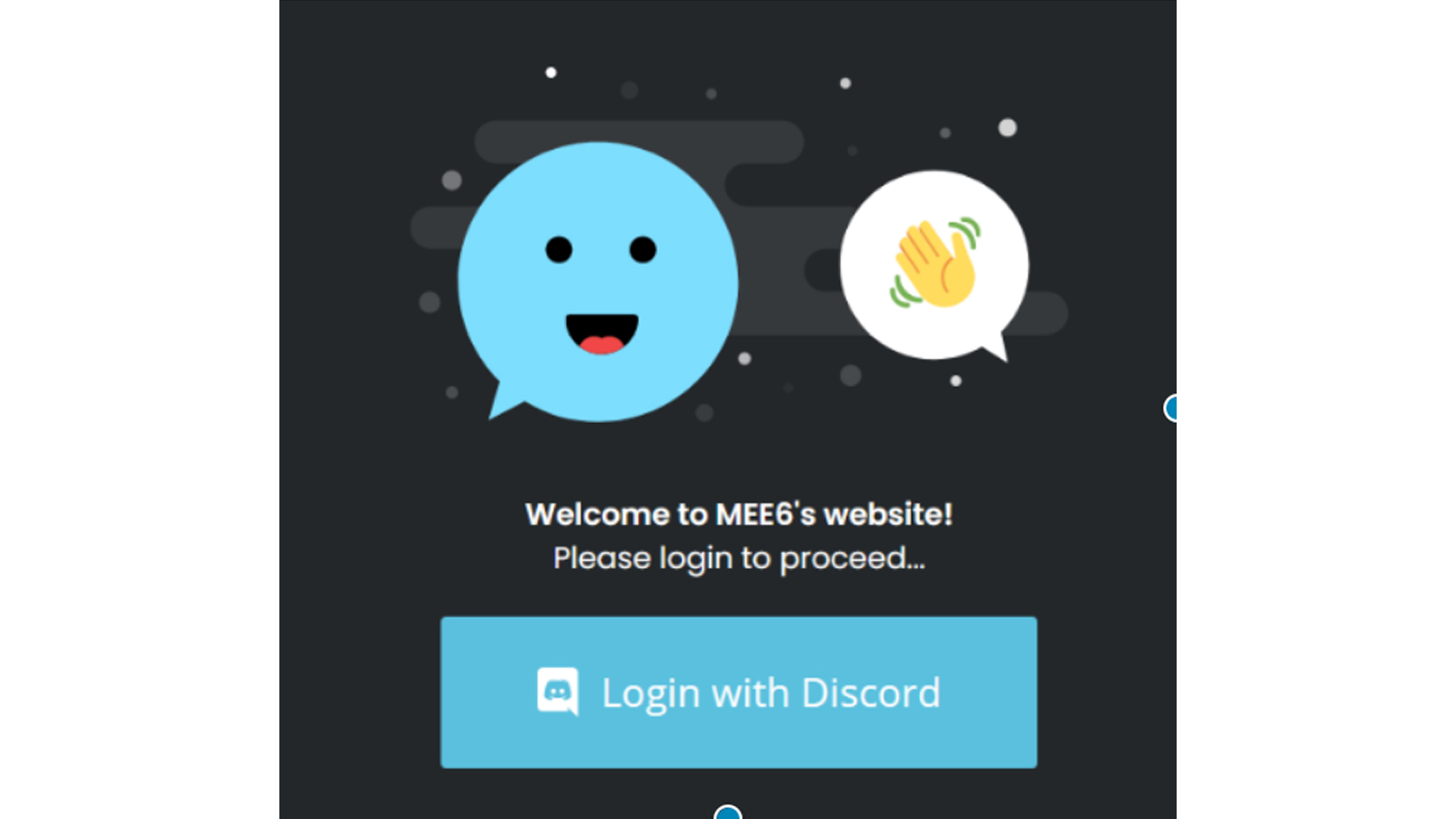 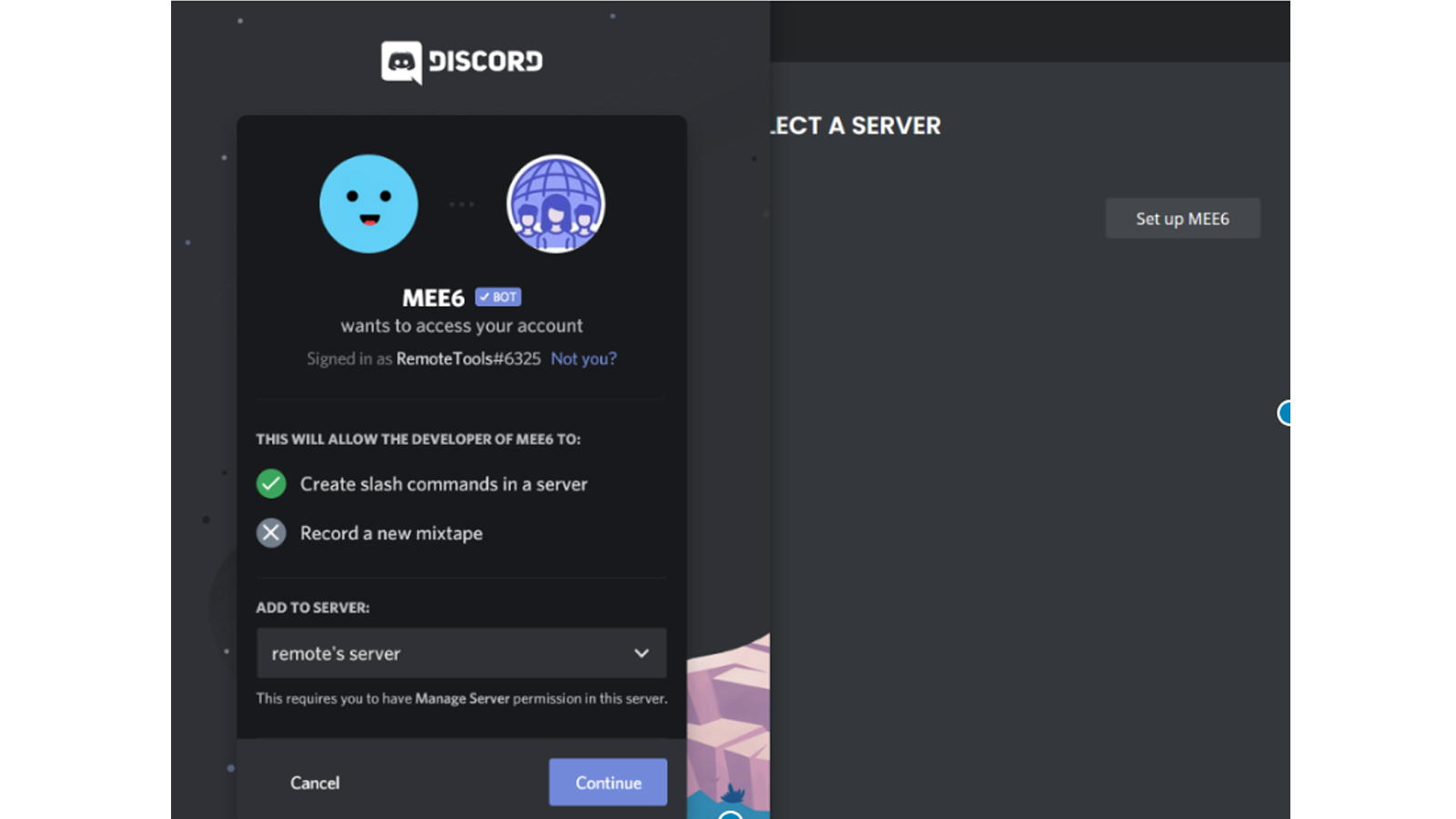 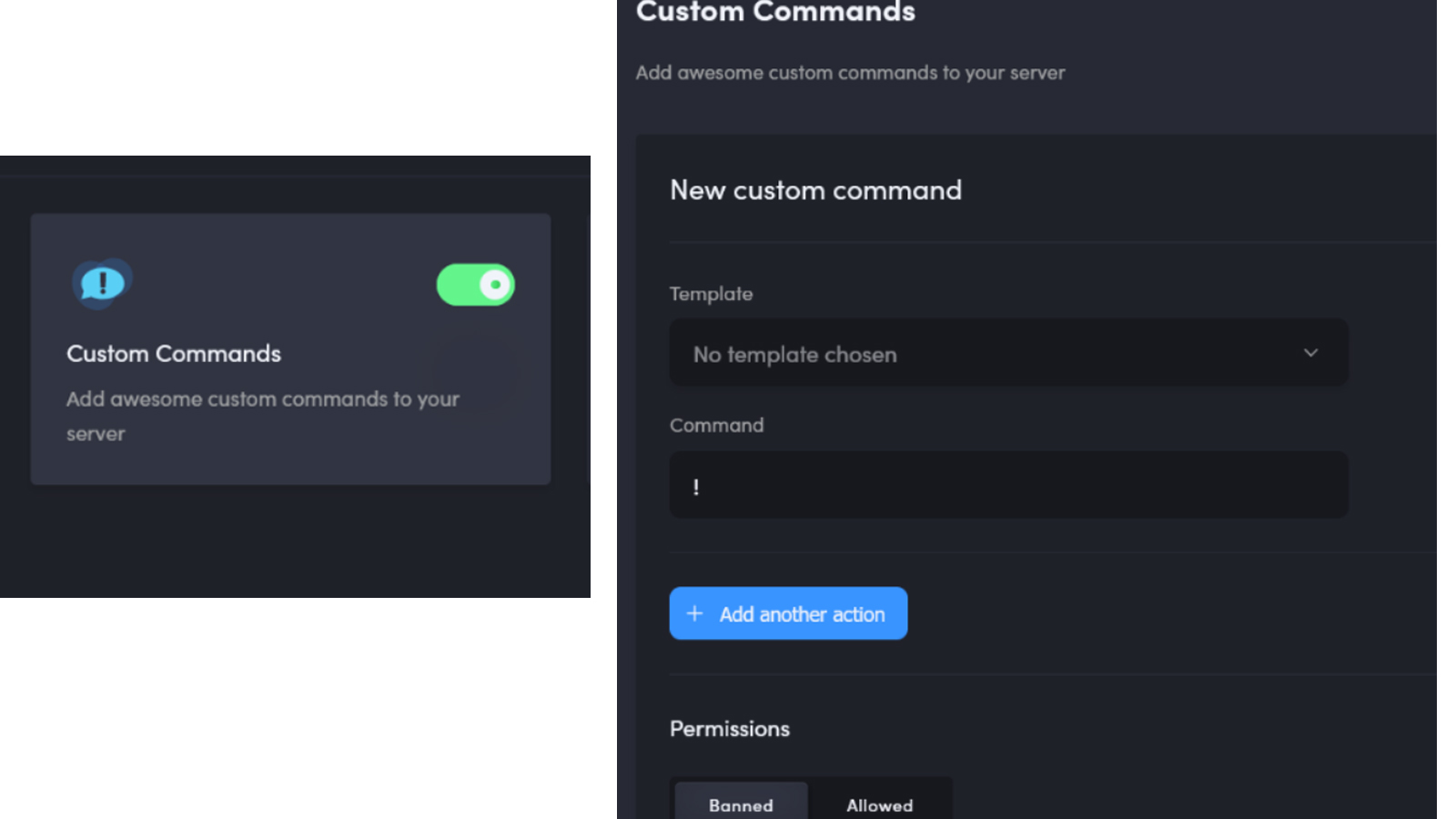 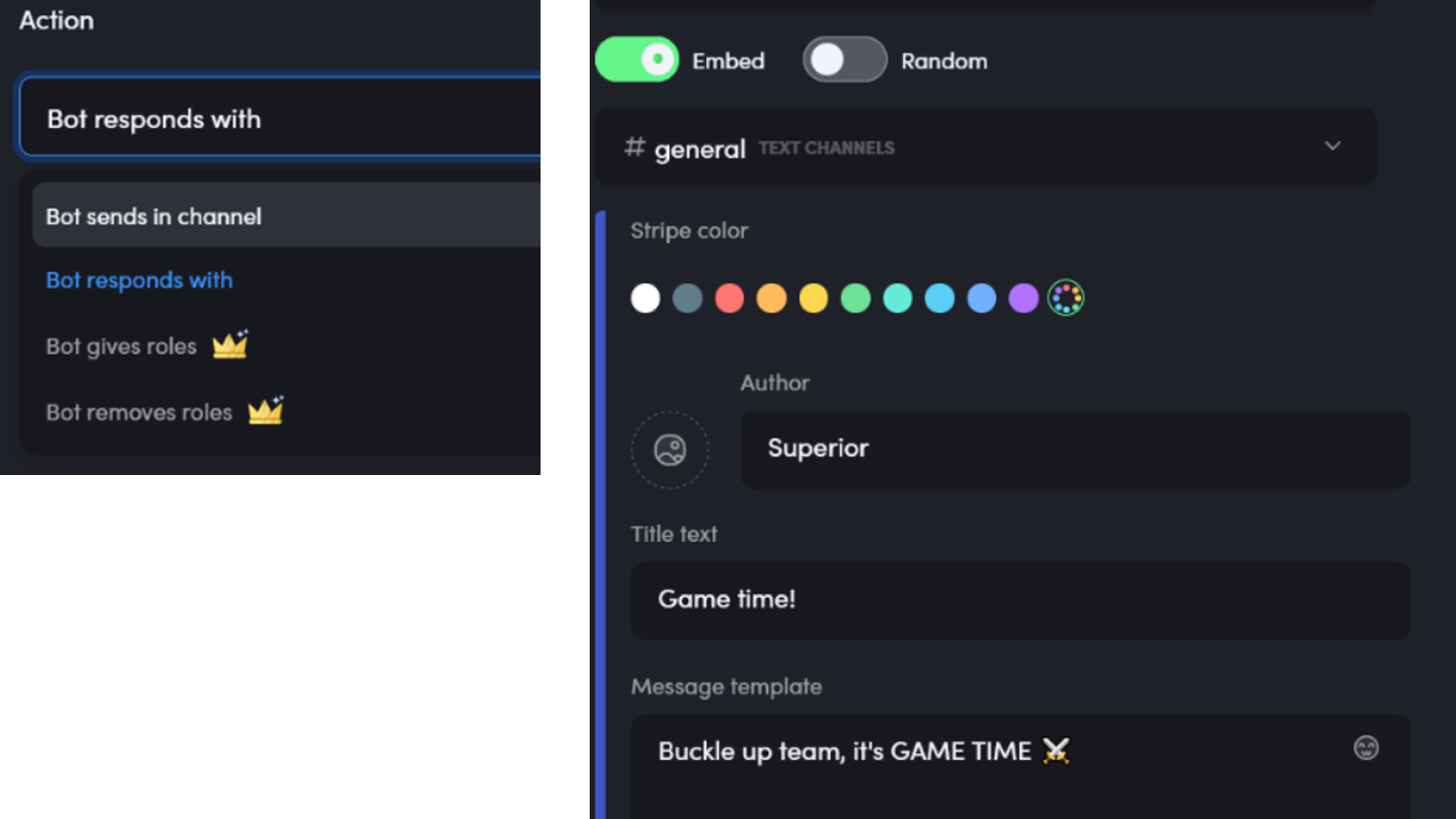 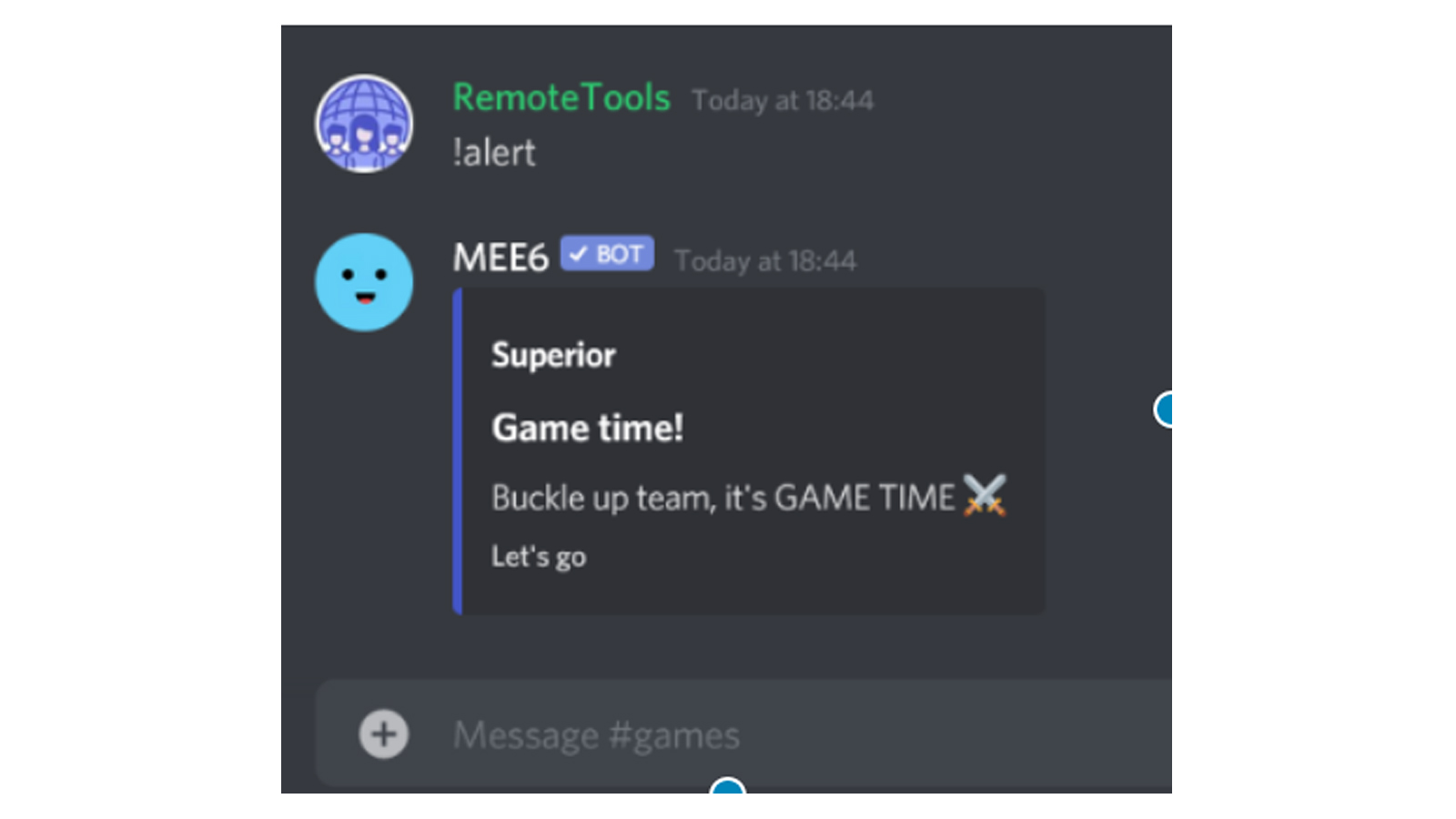 Also check out the Discord Custom Commands bot to create as many custom commands as you want.


Discord has a huge number of bots as seen in the bot store, all capable of performing a variety of functions. Clearly, giving the commands for every single bot in this blog isn’t possible.

However, it isn’t a difficult task to see what are the commands that can be executed by each bot. For example, to check the Dyno bot’s commands, you simply have to go to the bot’s homepage and go to Commands on the Navbar. Here, you can see a list of commands categorized in an easy to understand format.

You can enable or disable commands as you wish by going to the bot’s dashboard once added to the server. Each box will also require a prefix that you have to enter to make use of the command. This prefix could be an exclamation mark (!), a question mark (?) etc.

In the below table, we’ve listed some popular commands from the Dyno bot, a few widely used Discord bot. Some of these may also be used in other bots with a different prefix.


The Dyno bot is a highly versatile Discord bot and it has commands that can be used by admins as well as users alike to perform various tasks. Some of these commands mentioned here would also be found on other bots, perhaps with different names. Check out the Discord Dyno bot command page to check out a comprehensive version of the below table.


Discord chat commands are the ones which you can directly enter into the text box, both in your servers as well as when sending a DM to someone on Discord.

You can use both,

Discord slash commands - where you can simply start with a forward slash (/) and then type the name of the command.

Some may work only on your desktop, though, and not on the mobile device.


Besides the above commands, you can also find a comprehensive list of commands you can use for formatting text in Discord in our Discord text formatting guide.

The Discord commands I’ve entered don’t seem to be working. What went wrong?


As mentioned earlier, certain commands are specific to bots. So if you try to make use of a command, such as ‘/afk’ to specify that you’re away from your keyboard, it will not work unless you have the Discord Dyno bot active. The bot permissions also make a difference.

Another reason could be the device you’re using. Some, such as the ‘edit message’ are available only on the Discord desktop app and not on the mobile app. Given this, you can not make use of all commands on your mobile device. Often, some commands which are available on an iOS device may also not be present on an Android device and vice versa.

If the above two conditions are not the issue, then perhaps you’ve entered the command wrong and need to check it.


I want access to more commands. Where can I get them?


If you want to explore Discord commands, check out the Discord bot store here. On downloading a bot, you will be able to access all the commands it has to offer. Each bot has a list of commands it can execute. Of course, you would also need to activate these first.

Another way to explore commands is by checking out the various slash commands directly. So, you can go to the text box and type in the forward slash key (/) and a list of commands will show up. Here, bot commands as well as inbuilt commands will be visible.


Do I need bots for Discord commands?


Discord has a number of text and slash commands that you can use in your server or DMs, without the need for bots. You can perform commands such as sending an emoji reaction, getting IDs, fixing a typo, etc. without having to add a bot to your server.

However, bots do add a number of functionalities and commands and are a great addition to your server. For eg, setting an ‘afk’ status or kicking members directly can only be done if you have a bot. Hence, certain bots often become must haves in your Discord servers.

⇾ How to make an AFK channel in Discord on computer and mobile‍?

⇾ How to fix the ‘Awaiting endpoint’ error in Discord‍?

⇾ How to fix issues with Discord Rythm Bot‍?

⇾ How To Manage Your Discord Notification?

⇾ How To Stream Netflix On Discord?

⇾ What’s the Best Time to Stream on Twitch?‍

⇾ How to Unfollow on Twitch‍

⇾ How to find your Discord ID‍