Team Culture in a Remote Setting‍ 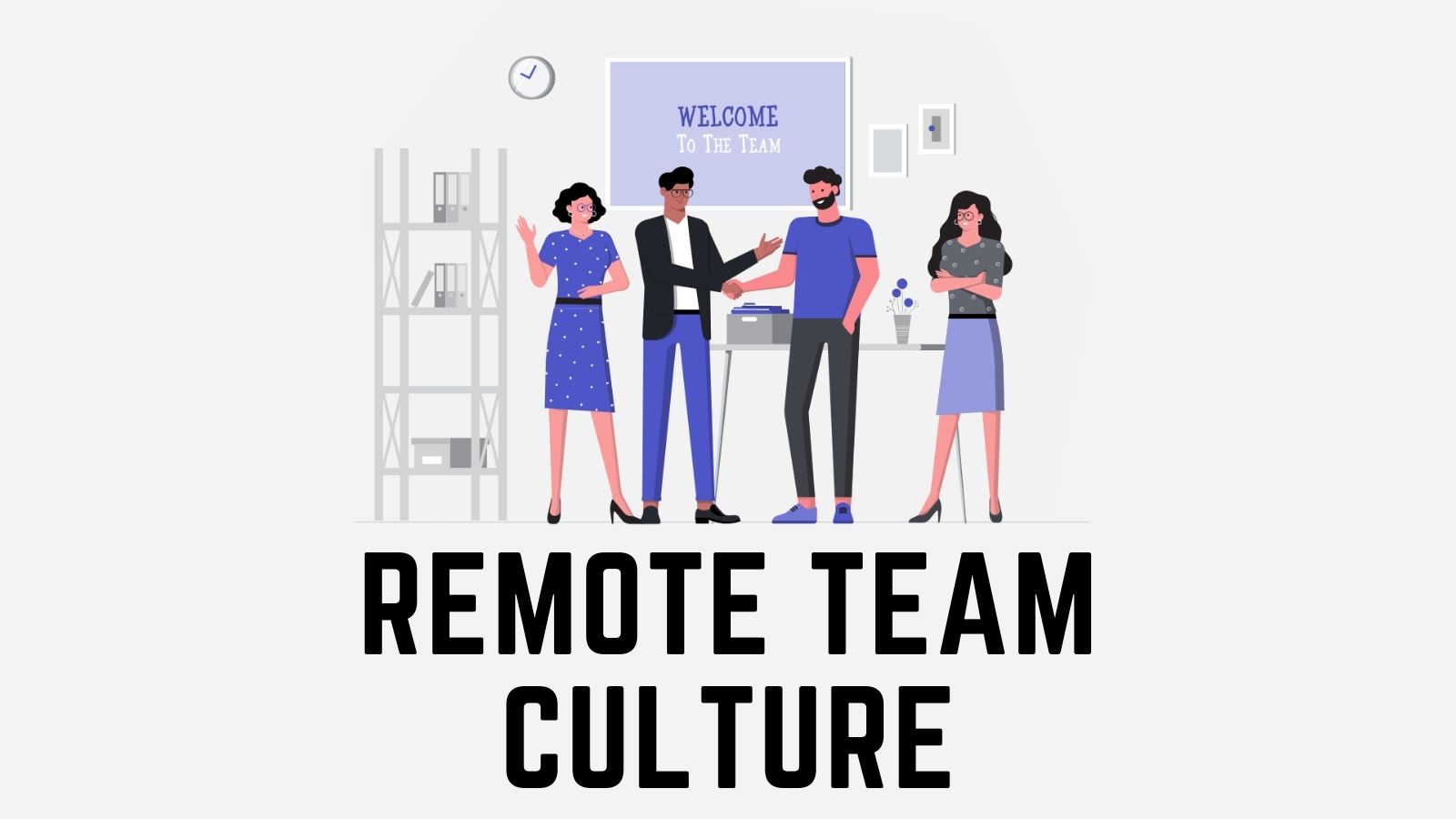 Culture can make or break a team. However, being an abstract concept, the need to build a strong team culture is often ignored. It usually signifies different things to each company, but at the core it is a bunch of values, which are either explicitly defined or implicitly followed, while working towards a specific goal. Culture generally has very little to do with an individual and is more about how a group of people perform together.

While it is tough to generally infer the culture of team, it is easier in a co-located team. The way people to talk to one-another, their attire, the layout of the office, among a whole lot of other visual cues, give an individual a lot of inputs to understand the culture of the team. All of these cues are absent in a remote team.

Therefore, it becomes clearly more important to be intentional in building and communicating culture in a remote team. Even in a remote team, individuals will continue to observe and learn what the team culture truly is, but being explicit about it, surely helps.

It comes about in everything we do. How we communicate, either via Slack, in Discourse, in Email, or on Zoom calls. It comes about on our retreats. It’s reflected in the decisions that are made, like sharing so much of Buffer’s processes and revenue transparently, etc.

Let's delve into some ways that you can build culture in your team:

While we spoke about the importance of documentation and to write down all aspects of work and different processes, it is also important to codify the values that the company stands for. This should be one of the first pieces that any new hire reads and understands clearly: the type of working style, interactions and attitude that is encouraged, as well as the kind that is actively discouraged.

The document is meant to be inspirational and at the same time extremely actionable. For each value, draw in quotes from past events that epitomise it in a beautiful way. This signifies that the document isn't merely a formal note, but is highly reflective of what the company stands for.

Transparency is one of our values. We have a handbook that is publicly accessibly - if we printed it, it would 3000 pages.

However, mere documentation of your team's culture isn't enough. It should be regularly brought up in meetings, in communication from the top management and from mentors to new hires. Commending & recognising exemplary instances of individuals embodying the values of the company motivates others to follow it too.

Further, be vocal about the team's culture not only internally but also on public forums. Write blogs on what your company believes in and also any new initiatives taken to promote such beliefs. Encourage even other people in the team to write about their thoughts and experiences. Even if they write on a topic that suggests the need for internal improvement, it reflects positively on the company - demonstrating transparency and the ability to recognise areas that require development.

Such initiatives help employees to understand the culture of the firm not only from internal communication but also from external sources. It also establishes the company as a thought leader in the space, which has a rub-off effect on the quality of talent applying to your firm. This nicely sets us up for the next point.

Not every person would be a good fit for the culture of your team. Therefore, fit-checks need to be integrated into the hiring process itself. Hiring managers have an additional critical aspect to verify when vetting a person. This is very crucial - as discussed earlier, when working remotely it is important to trust your colleagues entirely and you need to evaluate if that would be possible while hiring itself!

Publicly recognising the achievements of individuals is one of the best ways to build a positive working culture. Praising someone on a public channel on slack and allowing others to also give a pat, is a strong motivator.

In this context, Scott from Invision mentioned a tool called Bonusly, that allows team members to publicly award each other a nominal amount of money, whenever they would like to express appreciation. At Invision, each individual is allocated with $25 a month, that can be used to award colleagues. This promotes the culture of appreciating one-another in a very organic fashion.

One tool that we use which is amazing and I would highly recommend to everybody is Bonusly - it is this tool where you can literally give anywhere between a dollar to...we have a 25 dollars budget per month, so a dollar to 25 dollars, to anybody for anything. You can do it in slack natively and @ so & so + x dollars for doing xyz, #teamwork. It is this great little way to say that you are thankful for something or give someone praise...You really build rapport with the people that are giving these bonuses to, people see them and you really feels good when you get one.

In our chat with Darren from Gitlab, he mentioned that teams need to be intentional in building culture. This includes initiatives to ensure that team members interact with each other also outside of work-related conversations. To ensure such conversations actually happen, they encourage people to have chats about life in general and about work, during work time.

...you need to weave things like coffee chats, group social calls, team social calls, company calls. You need to weave that into the culture and carve out time company-wide to make this a thing. So every week I spend time talking to people about life not about work during work hours, because that is the only way to build relationships with people when you are all across the world.

Scott from Invision, did appreciate the need to be intentional about developing relationships, however, felt that such initatives could also make conversations quite awkward. He observed that initiatives that grew organically have done much better.

One organic method that has worked for them has been to allocate 5-mins at the beginning of each meeting to just socialising. On the other hand, he found that deliberately organising group calls with people who are leaving the company, such as a "happy hour" call or so, were very awkward - as it was just the one person whom everyone was attempting to talk to and each person waiting for their turn to do so!

...the other thing that we have done well on our team and other teams and have always promoted internally at Invision as I think this is the most organic, best way to do it. The first 5 mins or so of any meeting are religiously dedicated, whether it is 1-on-1s or a larger group, to just socialising - shooting the sh*t on random things. And that's your opportunity to like be human about stuff.

Shane, co-founder of Scrapinghub, mentioned that the crucial ingredient to success was to ensure that such initiatives were led and grown from bottom-up rather than being pushed from the top. He found that there was much wider acceptance and that everyone enjoyed the experience much more.

I think you need to be deliberate about a lot of things. I'll take a good example: it is what we call our Shrubbers voice squad - it is a group of people we set up to talk to people in Scrapinghub to represent different views, to kickoff initiatives...we are doing a Mouvember thing at the moment around wellness. So, we kicked it off and it was a deliberate set up and I decided that this shouldn't be all top-down led. I wanted a group of people at Scrapinghub who were passionate about this and weren't just coming from management.

An aspect which helps people bond with each other is common interests. Building slack channels that cater to specific interests where people can interact with others sharing similar passions helps them to get to know one-another, while adding an extra dimension to their workday. In our survey, 34% of our respondents shared that such dedicated channels were the easiest and probably the best method to build culture.

...things we have done where we find success at Invision and in my own team are: Channels in slack where people have certain interests. We have got about a few hundred at this point from cryptocurrency to NBA.....That's actually how you can really have a like a socialisation of certain themes and things that you are interested in with other co-workers.

When working remotely, we only interact with a digital 2D representation of any person. While many of the aforementioned initiatives can improve the quality of relationships in the team, none come close to the personal bonds that can be formed when people actually meet in-person. This makes a strong case for team offsites!

Most teams we spoke to have one every 6 to 9 months. The idea is to have informal interactions in a non-work environment to actually know personalities rather than just the concept of a person. Dave Nevogt, Co-founder & CEO of Hubstaff, recognised offsites as being the most important factor in retaining talent and creating a positive work environment.

We also talk about this in the discussion of "Remote-first or Remote-friendly", where intermingling of in-office and remote workers (in a company that isn't fully remote) becomes super crucial.

Another important initiative is to conduct regular surveys and personal sessions to get a pulse of the current levels of engagement and motivation levels of the team. There are many employee engagement measurement tools that attempt to tackle this outreach in a structured fashion. Listening to your employees at regular intervals can enable you to anticipate any future challenges and address them accordingly.